And Then There Were Two

After Boris Johnson stood down as leader of the Conservative Party we are now in the midst of selecting the next Prime Minister of the United Kingdom. Conservative Members of Parliament have whittled the field down to two final candidates, whom the 160,000 or so members of the Conservative Party (about 0.3% of the UK population) will now vote on to select the next leader of the party and who will then also become Prime Minister. The final two candidates are Liz Truss (currently Foreign Secretary) and Rishi Sunak (formerly Chancellor). We’ll know who the winner is on Monday 5th September 2022.

Despite a furious briefing war between the two remaining candidates, precious little has been said about the environment and climate, and even less on biodiversity. With the UK having just broken its all-time temperature record and exceeded 40°C for the first time, and the UK being one of the most nature depleted countries on Earth, you might think these issues would be a bit more front and centre for the candidates.

We have to remember of course that the two remaining candidates were, firstly, appealing to their own party MPs and now, secondly, to the Conservative Party membership – which is largely white, older, and lives in the south of England – and the candidates have seemingly decided there is little interest in the climate emergency (nevermind the biodiversity crisis!). This is despite CIEEM and 13 other professional bodies writing to the Prime Ministerial candidates on the issue of net zero.

The point however is that humanity is facing an existential threat in the form of the interlinked climate and biodiversity crises, and no matter who is elected as the next Prime Minister far more needs to be done.

A Glimmer of Hope

To be fair, some Conservatives have tried to raise the issue saying that ditching net zero would be electoral suicide, and COP26 President Alok Sharma has threatened to resign if the next Prime Minister fails to commit to a strong green agenda.

Both candidates have backed the 2050 net zero target, though caveating that with not harming growth or the economy. One of the first things they’ll have to do is explain how net zero will be delivered, as the High Court has ruled that there isn’t enough detail in the strategy.

Looking at their previous records on the environment, Liz Truss cut renewables subsidies whilst she was Environment Secretary and has suggested moving away from the EU Habitats Directive in favour of creating a new system based on a new UK nature audit. Rishi Sunak has defended cutting domestic flight taxes as Chancellor, and wants to maintain the onshore wind ban and instead increase offshore wind development. In recent parliamentary voting, both candidates have either voted against environmental amendments or been absent.

As if to reinforce the notion that climate change is not that important, neither candidate attended the Chief Scientific Advisor’s climate briefing for MPs on 11 July, at which a number of scientists showed MPs the science and the major issues facing humanity.

Last night’s BBC debate between the two candidates briefly touched on climate change (but not biodiversity). The candidates were asked what three things needed to be done to tackle climate change.

Sunak suggested that his daughters were the experts on this, which he likely intended as a nod to younger generations, but as someone wishing to hold the highest office it comes across as trivialising the seriousness of the climate emergency. His three solutions to climate change were to insulate buildings and homes (perhaps all those Insulate Britain protests weren’t for nothing…), improve recycling, and to support innovation (such as carbon capture and storage).

Truss answered the question by saying that we should be using less, wasting less (especially food), and also supporting innovation. She also wants to cut the green energy levy and fuel duties, which are likely to increase emissions.

Their answers show a lack of understanding of the major drivers of climate change (transport, energy, food, etc.) and particularly put a focus on the responsibility of the individual, ignoring Government’s role in creating a level playing field that drives all businesses and individuals to do the right thing without being disadvantaged.

And innovation can be part of the solution but it has already been pointed out by the Climate Change Committee that the UK Government’s climate strategy is too heavily reliant on unproven and yet to be developed technological fixes.

We didn’t even get the Government’s seemingly favourite answer to the climate emergency: tree planting.

The next Prime Minister needs to recognise the serious issues and engage with systemic solutions to the climate and nature crises.

They need to build on Climate COP26 and the Leaders’ Pledge on Forests and Land Use, and they need to attend Biodiversity COP15 at the end of the year (which Liz Truss has said she would attend).

They need to build on the Environment Act, the 25-Year Environment Plan, and set action in motion now to achieve net zero by 2050. And they absolutely need to ensure that there is enough expertise and funding to achieve the ambitions set out in the above documents – particularly through better funding and support for local authorities and the statutory nature conservation bodies to deliver nature restoration and climate mitigation and adaptation.

As both candidates seem to admire Margaret Thatcher so much, perhaps they could take a leaf out of her book – at least on her concerns about climate change. The evidence and urgency have only increased in the intervening years since Thatcher was in office, and there is a dire need for leadership and action on the triple interlinked climate, nature and inequality crises.

Once in office, whoever wins will have to show more leadership on the environment than we have seen so far. Otherwise we will all suffer the consequences. 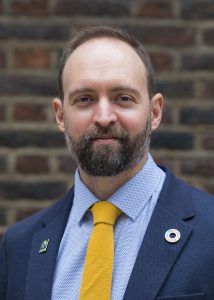 Jason Reeves is CIEEM’s Head of Policy. He strives with his team to build CIEEM’s influence with governments, civil servants, environmental partners and other sectors for the benefit of people and nature. He also works with the In Practice Editor to produce CIEEM’s quarterly magazine.