Being both an ecologist and a musician, my house is littered with either recording equipment or musical instruments. Luckily, I work in bioacoustics (defined by Wikipedia as “a cross disciplinary science that combines biology and acoustics”), allowing me to indulge both these passions!

I can often be seen prowling the countryside, trailing microphones and carrying recorders, pockets full of batteries and SD cards. Back home, a comfy desk and a cup of tea, and I’m soon lost in a world of sonograms. A sonogram is a graphical picture of sound, with time along the bottom axis and frequency up the side. Each bird’s song, for example, has its own signature sonogram. As with people’s signatures, some species are very flamboyant, like a robin, whilst others have the avian equivalent to a cross on a page (mallard).

Zoom in and even the simplest of calls is often a complex series of vocalisations with minor differences between each repetition. With a little practice it is possible to quickly identify species from their sonograms patterns, using obvious differences in timing, the frequency range they use and how the songs are repeated.

How can we use this in practice as ecological consultants? Many of us are familiar with bat detectors, which record bioacoustic sounds in the ultrasonic range, but what about recording in the audible range (generally between 20 Hz and 20 KHz)? Amongst the many survey methods available to us, when should you consider bioacoustics to improve your bird surveys, and what limitations should we be aware of?

Firstly, your target species must make a sound, and that sound should ideally be distinguishable by ear. If you’re surveying for a bird that rarely makes a peep, another method would probably be better! However, if your bird calls loudly and regularly, but is hard to see, easily disturbed, nocturnal or lives somewhere very hard to reach, then read on!

Bioacoustics data can tell you so much more than just whether your target species is present. With appropriate testing and calibrating, you may be able to obtain population indices. If you time your recordings carefully or carry out long-term surveys, you can learn about behaviours such as mating, feeding chicks and migration times. The data you collect can tell you about an areas’ biodiversity, species assemblages and soundscape ecology. Finally, once the data are collected, they can easily be stored, shared with colleagues and reviewed. The ability to collect data that can be analysed in a multitude of ways and for a multitude of species and applications, is a major benefit of bioacoustics recording.

One new and fruitful area for ecologists to explore with their bioacoustics data is soundscape analysis. Below are two of examples of long recordings at two very different locations. The first is of a small block of woodland close to Bamford. The second is a recording of rush hour in the busy centre of Barcelona.

Animals have specific niches within the acoustic range, so how do human sounds such as machinery and vehicles affect wildlife? How can they compete with the mix of machinery and people creating a constant hum? In urban areas, many songbirds can be found singing at night: there are two explanations for this. Light pollution may be confusing the birds into thinking it is actually daytime, but also during the night there is less acoustic competition from the urban environment. As ecological consultants, we should be considering noise pollution more when we look at protecting wildlife.

The equipment you need depends on whether you plan to carry out active or passive recording. Active recording, for example walking a transect and recording at fixed points, is a great way to back up findings from other methods such as visual counts. At relatively little expense, it provides a snapshot in time. While labour intensive on its own, active recording is usually done at the same time as other survey methods. There is a wealth of handheld recorders available, in all price brackets, from a free mobile phone app such as SongSleuth, to a Tascam or Zoom recorder with a built in or separate microphone.

Passive recording, on the other hand, involves leaving static recorders in the field for days or months at a time. The equipment is relatively expensive but once the recorders are out, they can generate large amounts of useful data without taking up a lot of staff time, and without creating any disturbance. However, a major limitation of passive monitoring is that it is very difficult to count individuals. Equipment such as Wildlife Acoustics’ rugged, weatherproof SM4 and Mini recorders are perfect for long term monitoring, with a long battery life and simple scheduling of recordings. For those people who have SM2s or SM3s in their bat detector collection these can be turned into an acoustic recorder by simply changing the microphone from an ultrasonic to an acoustic one. 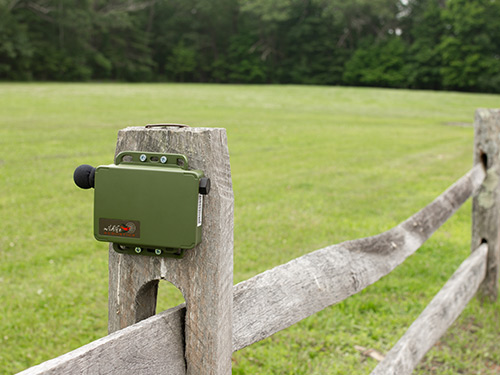 There are also wider issues with using acoustic recording to survey for birds that everyone considering this method should be aware of. Firstly, there is a lot of noise in the acoustic range. Unlike bats, which call the relative quiet of nocturnal ultrasound, the sheer cacophony of audible sound generally means it is not possible to trigger recordings when sound is detected. On a typical early spring morning in a UK field you might hear seven or eight bird species competing with road noise, lambs, frogs and drizzle.

Reducing the amount of sound you record, so as to focus on what is important to your work, is an important approach. For example, you might set your recordings to run only at times of year and times of day when your species is singing, such as the spring dawn chorus. If you’re interested in owls, you might only record at night. You can also set your recorders to record for a short period on a regular basis, such as 10 minutes every hour day and night.

Whatever techniques you use to reduce the amount of data you collect, distinguishing all these sounds and pulling out the ones you are interested in requires some specialist analysis methods. Wildlife Acoustics’ Kaleidoscope Pro is one such programme, designed to analyse large sets of data, and dealing easily with multiple folders of data.

Kaleidoscope Pro automatically scans your recordings and pulls out distinct sounds and phrases, such as frog calls or bird songs, and groups them into clusters. Once grouped, you can look through sonograms sorted into clusters, and view, sort and label them in an exportable table format. Cluster settings can then be customised and refined to help you more easily search for a specific species. It is even possible to build an advanced classifier by training the software with positive identifications and false identifications. Once you have built a classifier, you too can be like me, back at your comfy desk drinking some tea and letting the software find the specific species in other recordings.

Paul Howden-Leach MCIEEM is an ecological consultant with over 20 years experience who now runs his own ecological consultancy (Skyline Ecology) based in the Peak District National Park. He works with a wide range of protected species but specialises in bats, with particular focus on bat identification using sonograms/sound analysis. Paul also works with Wildlife Acoustics and delivers training all over the world on bat, bird and mammal bioacoustics recording and analysis techniques.

CIEEM is grateful to Wildlife Acoustics for sponsoring the CIEEM Scottish Conference 2020.

Blog posts on the CIEEM website are the views and opinions of the author(s) credited. They do not necessarily represent the views or position of CIEEM. The CIEEM blog is intended to be a space in which we publish though-provoking and discussion-stimulating articles. If you’d like to write a blog sharing your own experiences or views, we’d love to hear from you at JasonReeves@cieem.net.