Seagrass is a superhero when it comes to its carbon storage powers. It can remove around 30 times more carbon from the atmosphere, compared to forests! For this reason, restoring Seagrass across the world is essential in helping to tackle the effects of climate change. Seagrass is also pretty special as they are one of only three marine flowering plants in the world!

I have grown up by the sea and have been inspired by the incredible marine life that lives there, however, I was not aware of the drastic decline in Seagrass in the Solent. Sadly, in the 1930s populations of Seagrass were decimated by a wasting disease caused by Slime Mould and they have never fully recovered. Another strain on them is nutrient enrichment from nitrates, oil pollution and anti-fouling paints used on boats. 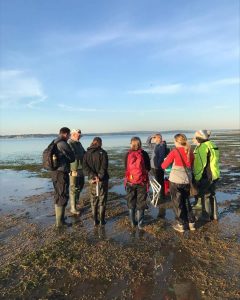 Being someone who has been affected by eco-anxiety in some form, I have, at times, felt helpless about the state that our planet is in and wanted to take some action. I came across a new project that The Wildlife Trust had been progressing around restoring Seagrass in the Solent. Once I found out the benefits of restoring this incredible plant, it was a no-brainer, and I had to join. Also, being called a ‘Solent Seagrass Champion’ was pretty cool!

So far in my role, I have helped to pack seed bombs that have been dispersed across different sites along the South Coast, which have now excitingly started to grow! I then went on to attend a training session to help identify different types of Seagrass, the stages at which they were growing and flowering, and the wildlife that lives and inhabitats them. One of my favorite species that live amongst the Seagrass is the Peacock worm. Definitely worth getting up at 4 am for! 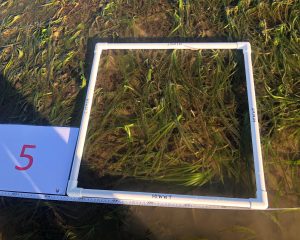 From this experience, I can now go out and survey and monitor the growth of the Seagrass, as and when needed. There are also opportunities to monitor the seagrass and collect seeds through diving expeditions, which is next on my list!  I would recommend getting this experience to anyone and I have also really enjoyed getting to know like-minded individuals in the process. I am looking forward to future opportunities to help with this inspiring project!

Why not try some volunteering for yourself, if you have the means to, and sign up to our CIEEM Member Action Pledge in the process? You can also get involved by sponsoring a seagrass seed pod.

Linking to carbon capture, why not check our upcoming Autumn Conference which focuses on ‘Delivering a nature positive, carbon negative future’.

Krystie holds a BSc in Wildlife Conservation and Zoo Biology from the University of Salford. After graduating, she went onto work for The Mammal Society as a Training Co-ordinator, which then led her onto becoming a Professional Development Co-ordinator with CIEEM, where she oversees conferences, webinars, CPD and the degree accreditation scheme. Krystie has a passion for marine life and has subsequently become a Marine Mammal Surveyor with ORCA. Krystie enjoys long walks and adventures with her two rescue dogs and daughter, as well as yoga and running.