After the in-person event was postponed from the 1st April it was great so many people could join the online event in September. The evening started off with some speed presentations from invited speakers.

Vikki Patton, Ramboll, set the scene by defining Biodiversity Net Gain (BNG) as development that leaves biodiversity measurably better than before, and discussing how it is being implemented internationally. In Scotland, many organisations such as CalMac, Scottish & Southern Electricity Networks, Scottish Power, and Network Rail have trialled and are delivering on BNG and there is a growing body of consultants utilising BNG metrics as a tool for leaving biodiversity in a measurably better state than pre-development. In summary, it’s very deliverable. However, policy and legislation are deemed to be lagging behind to make BNG a requirement like in other countries (it will be mandated in England this year through the Environment Bill), and level the playing field across the board.

David Burslem, Aberdeen University, told us about a research project conducted by Liliana Mijares in collaboration with Aberdeenshire Council and Aberdeen City Council, to help council planning departments to become better prepared for the future introduction of BNG policies. Using two approved planning applications (a housing development near Banchory, Aberdeenshire; and the new home for Aberdeen Football Club) the study looked at how implementation of BNG would help identify potential biodiversity loss and the importance of careful site selection. It was highlighted that legislation is very much needed, and that permanency of mitigation is quite a big issue to address. Traditional survey methods do not address all the information needed and there needs to be more consideration of ecosystem services and connectivity. Take home message: “you can’t just consider on-site biodiversity; we need a landscape-scale approach”.

Francis Williams, Scottish and Southern Electricity Networks, talked about how BNG approaches have been trialled successfully for sub-station sites where the land is owned by SSEN, with the aim that SSEN will achieve total BNG from 2025, but this a precursor to wider Environmental Net Gain. Scottish specific variations were made to the DEFRA metric. Logistical challenges such as staff training, data recording and longer-term visions all require consideration and future steps include engaging third sector stakeholders and local communities. The trade-offs between wins for climate change (carbon) vs. biodiversity present challenges from some stakeholders. BNG is now considered at optioneering stage – site optioneering toolkit is used to define the site condition, and ecological mitigation required. A key issue is it needs long term input into management plans, with ongoing monitoring and adaptive management required.

Andy Tharme, Scottish Borders Council, explained that mitigation and compensation measures may include: 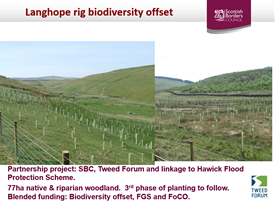 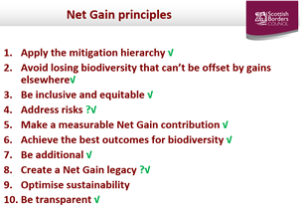 Paul Sizeland, NatureScot (formerly Scottish Natural Heritage), explained how the Planning (Scotland) Act 2019 requires the National Planning Framework to contain a statement about how Scottish Ministers consider that development will contribute to a set of six listed outcomes. These include “securing positive effects for biodiversity”, though the Act does not provide further detail on the scope or content of the statement. The statement is an opportunity to provide a clear and robust policy context for delivering positive effects, which will be part of the statutory development plan against which proposals will be assessed. Although there are good examples of achieving positive effects for biodiversity and useful industry led initiatives this is not consistent and is usually via informal mechanisms. Important to consider how existing national policies, frameworks and regulatory tools will all fit together to maximise securing positive effects for biodiversity. Paul stated that nature based solutions will bring this to the fore, and also the need to quantify the benefits, and measures such as green roofs and rain garden benefits will become more mainstream.

After the series of informal talks by the speakers and a short Q&A session, participants were divided into four Zoom breakout groups to discuss and debate four questions.

This was the first time that many participants had done this as part of an online event, and it worked really well.

When we reconvened, each group’s main points were presented back to everyone attending. Key messages from each of the questions are outlined below:

The groups comprised consultants, researchers, policymakers, conservationists, and students which led to interesting perspectives from a range of backgrounds and experiences. To me having this diverse grouping together was brilliant and generated lots of interesting discussions. A Padlet (online post-it note forum) allowed everyone to contribute their thoughts and perspectives across all four of the topics discussed at the breakout sessions

Unfortunately, we could not mingle and carry on discussions over pies and pints. However, discussions did continue virtually, and it was clear that everyone enjoyed learning and discussing about BNG and the potential for developing and adapting it for Scotland, with hope that there could be clear and strong policy direction from Government.

I left the event with many questions in my mind like: “Where do we go from here?”; “How do we maintain the momentum?”; “With so many policies and legislation being developed how do we ensure we learn from lessons learnt elsewhere?”

I hope that many of these discussions are carrying on and this provided a useful forum that we can build on.

The BES SPG and CIEEM would like to thank all the speakers for being so adaptable and happily transitioning to the online event and providing such a stimulating debate. Thanks also to all the attendees for participating in the workshop.

A report of the event can be viewed here. 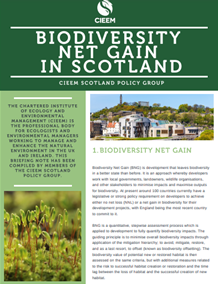