Since the moment Gilbert White decided to spend the bountiful free-time offered to a retired curate indulging his obsessive wonder for the natural world, Britain has been known to be a pioneering home of naturalists. From 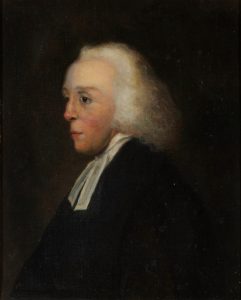 curious clerics, to the rain-sodden yet determined ecologist defying all physical and logistical challenges thrown at them to complete a Phase 1 habitat survey, we have spent a huge amount of time trying to understand the chaotic, beautiful mess that is nature. It may not feel like we’re necessarily a nation of naturalists when you bring up such worthy concepts as the standard consistency of badger faeces with your ‘non-converted’ mates in the pub, but take one trip to the archives of the Natural History Museum and the 80 million-odd specimens stored there, and you realise we take it very seriously indeed.

Except, for all the knowledge we have gained and continue to yearn for, when it comes to actually conserving it, we can be pretty unimaginative.

That partly comes down to the fact that, ecologically speaking, we are an incredibly broken island. We have gouged our woodlands, slaughtered our scrub and parched our wetlands to the extent that, almost uniquely in the world, we seek to preserve low-intensity farming and forestry systems – such as chalk download, lowland heath and hazel coppice – as our natural panaceas. This is despite the fact these are low-intensity systems of farming and other land uses, rather than fully functioning ecosystems. Why do we still insist on cutting meadows in mid-summer for example, even when this is bad for many invertebrates, small mammals and plants? Because that is the time of year the fodder was most palatable to livestock, and even when such meadows are maintained for nature conservation, this “we’ve always done it this way” line of thinking often prevails.

This worship of anthropogenic habitats is perhaps why rewilding has taken such a hold in the conservation conversation in the UK at least, so revelatory does the latter concept seem. Except in places like the Americas, Australia and New Zealand, who still regard the advent of agriculture a relatively recent cultural phenomenon, what we call rewilding is just run of the mill conservation to them; something directly observed to me by a conservationist from the latter, now living over here.

And, like scattering the pieces of a jigsaw across the floor and trying to reassemble it with no guide as to what the finished picture should look like, the habitats and species of these cultural habitats have had to attempt adaptation in ways that are likely to be more restricted than what would naturally occur.

This has given rise to an affliction common in many a British naturalist – ‘Over-specialisation syndrome’.

The condition presents itself as the deduction that species A needs specific climate B and habitat-combination C, but not too much of habitat D, and must have item E to eat if it is to thrive. Of course, there’s no smoke without fire, and such requirements are generally how you’ll find many species living in Britain today.

But again, these are often in the human-driven artificial biomes from species that have been pushed into a far more unusual place than the dynamic complex of complete and edge-based ecosystems they evolved in. The hazel dormouse is a notorious example. A species which will supposedly take flight from its mortal coil if considerable hazel understory and shrub is not available, will snuggle itself, quite comfortably into biomes as diverse as gorsey heath and Molinia grassland with hardly a tree in sight. Indeed, one Cornish population has found the bramble and stunted oaks of a central reservation of the A30 to be positively Ritz-like. 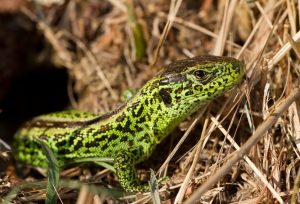 What these unconventional preferences show is a rule true to pretty much all animals; as long it has appropriate food, cover and temperature, most of the time they will thrive pretty well. Even those with apparent extremely habitat-limited range might not even be living to their full potential. While in Bavaria last April, we stopped to admire one of the many beaver-generated wetlands that these rodents have spread across the state’s creeks and streams. Gazing down at the top of the dam’s wall, I noticed a small scaly creature that I had to double take upon recognising its distinctive spots. Sure enough, here in this soggy, shady and mucky retreat, was a female sand lizard.

I pointed it out excitedly to the local ecologist showing us the site, and he regarded it with the same mild interest that would’ve been garnered from a feeding mallard. He explained to us that the sand lizards would bask out on the dams, before actually swimming out onto jutted-out pieces of deadwood in the ponds in order to catch small flies – an anecdote we almost wouldn’t have believed until the lizard, like a tiny marine iguana, paddled on it’s way through the brown water. I wondered how many British herpetologists would’ve predicted this ‘specialist of sandy heaths and dunes’ to do that.

All this, and the sand lizards in Bavaria are still the Lacerta agilis we know and love from Britain. There’s nothing to say that when beaver wetlands swamped our river valleys in the past, these animals lived a very similar 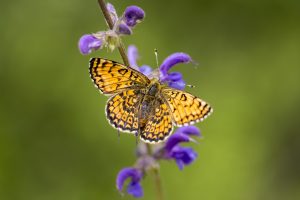 existence, perhaps alongside other unexpected specialists like Dartford warblers, fen raft spiders and marsh fritillaries. All in a time before we started modifying the land, when the mass purging and fragmentation led to wildly skewed views as to what such species needed with each successive generation. When we are struck by how unusual it is that water voles are living in grasslands in Glasgow, if we look to their continental behaviour or even their past in Britain, you’ll often find them supporting this ‘novel’ behaviour. The wilding project at the Knepp Estate has also been a frequent resetter of assumed ecologies. Most notably there are the vast population of purple emperors that show preference for sallow scrub over ancient oak wood rides, but nightjars popping up outside of heathland and peregrines nesting in trees are other such examples.

Perhaps as a combination of our battered and twisted natural assemblages and our insatiable need to identify and define, with a decent helping of a relative lack of endemic UK species, many naturalists even tunnel vision fragmented species into ‘races’ that should not be tampered with whatsoever. Going back to sand lizards, I once met an ecologist who shared a mutual friend that was licensed to breed the species for the reintroduction programme. He was incredibly frustrated however with said-friend’s practice, and when I enquired why it was allegedly “because he was taking Dorset-race sand lizards and releasing them in Surrey.”

That’s the level we’re dealing with. When we talk about the risk of genetic bottlenecking and the need for healthy, diverse populations, why on Earth is thinking like that still prevalent? While haplotypes and other such genetic distinctions are apparent in a single species across their range, what real benefit comes from ultra-purity such as that?

Nature is a chaotic complex that is still supremely adaptable, and at times perhaps it is best to admit some humility over what parts of it really matter, and to double-check whether something we think we know about nature is really true, or in fact a projection of rules we’ve probably made up. We must be more open to its dynamism. We are in the midst of climate breakdown and the worst extinction event since the dinosaurs, and we are 29th from the bottom of the most nature-deprived countries in the world. We can’t shuffle our feet in over-caution.

Crucially, we need to move away from merely macabrely charting the speed at which species fall off a cliff, and arguing about whether a moth from Yorkshire has two more chromosomes than one from Sussex, towards a more fulfilling philosophy: One of restoring life, as much as possible, to show that no matter what difference it makes, we are not giving up all hope.