Working with bats regularly as many of us do it’s easy to focus on the operational side of managing surveys, data and reports and to forget why we got interested in this species group in the first place. This is something that can ring true with a lot of ecology work, turning a passion for natural history or wildlife into a career for some can suck the enjoyment out of it. Especially at this time of year, when back to back surveys leave bat consultants particularly sleep deprived, perhaps having not seen friends or family for weeks, it can seem more of a chore than fun. I’ve known good ecologists leave the profession for this, and personally in the end I had to step away from full-time consultancy before it became just a job to me.

2020 has been a strange year for all of us, there may have been less surveys for some (although that’s probably at least changed now), and uncertainty over where Brexit and recent changes to planning policy may leave us in terms of protection for our wildlife. The State of Nature report and the State of Mammals report have been damning over some of the declines we are seeing, even our best efforts to date don’t appear to be enough to save some of our most iconic species from a seemingly inexorable decline. Couple this with a world in the midst of a pandemic, a planetary emergency, and news reports showing our world, both at home and abroad, literally on fire, it can seem a hard time to be an ecologist and exhausting to care about the natural world.

To take us out of that for a moment though, even if it’s just for the few minutes you’re reading this short blog, I want to look at the fascination of bats, perhaps why each of us got into this in the first place. We talk about nature connectedness, its importance and its lack in many people as if it’s something that happens to other people, not us as professional ecologists. But I’d argue that it can happen to us as well. When was the last time you left the Weather Writer at home and just went bat watching? Just for the hell of it? Not to run a bat walk, not to do a survey, but just for the shear enjoyment of watching the aerial acrobatics show. Something I’ve tried to do at least once a year is go bat watching, without even a bat detector to hand. Not only does it really help your skills at spotting bats, looking for those little differences in silhouette or flight pattern which can flag up different species, but it’s also incredibly relaxing, meditative almost, to concentrate on nothing but observation. For me, it’s part of the joy of watching bats, that almost child-like captivation of seeing them, a privilege that it can feel like is all your own, because you found them, they’re your discovery and almost no one else knows that they’re here. It’s only at these points do you really get to feel like you’re getting to glimpse into the secret world of our nocturnal wildlife.

2020 has marked Gilbert White’s 300th birthday, the father of amateur natural history in the UK, and indeed a huge inspiration, whether you’re aware of it or not, in defining how and why we do what we do. Gilbert wouldn’t have known the word ‘ecologist’ (the term œcology wasn’t coined until the mid-19th Century), but within all his writing we can see the origins of our subject, and a true field naturalist. What set Gilbert apart from the other naturalists of the day was his passion for observing behaviour in the field, not just measuring morphological characteristics, and most importantly his enthusiastic communication which really encapsulates his joy in his discoveries, common or otherwise. Back in 1789 Gilbert was only aware of  three species of bats, Vespertillio murinus (although this is the scientific name for the parti-coloured bat, he likely meant the Pipistrelles), Vespertillio auribus (the brown long-eared) and what he called the Great Large Bat, which we now know as the Noctule. Thanks to ever improving technology like the bat detectors we use, we now know of many more species, and with research delving further, full genome sequences now being published for some for example, we can continue to improve our understanding of them and their taxonomy. But that joy in watching a bat for me certainly will never change. It’s been with me since my first bat walk when I was 12, still makes me smile 30 years later, and it was certainly there for White even with his just three species. He gives a delightful account in a letter to Thomas Pennant on September 9th 1767:

“I was much entertained last summer with a tame bat… The adroitness it shewed in shearing off the wings of the flies, which were always rejected, was worthy of observation, and pleased me much… While I amused myself with this wonderful quadruped, I saw it several times confute the vulgar opinion, that bats when down on a flat surface cannot get on the wing again… As I was going, some years ago, pretty late, in a boat from Richmond to Sunbury, on a warm summers evening, I think I saw myriads of bats between the two places; the air swarmed with them all along the Thames, so that hundreds were in sight at a time.”

Bats have been fascinating us for years, and I know, no matter how many times I see them, they will always put a smile on my face. Recording and data of course is incredibly important, it’s essential to our understanding of bats, and to our ability to conserve and protect the species. But on International Bat Night I encourage you, even if just once, to go out and simply enjoy bats; remember why you’re a natural historian first and foremost, and go and be fascinated by bats again.

Saturday 29th August is International Bat Night. What will you be doing to mark the occasion? 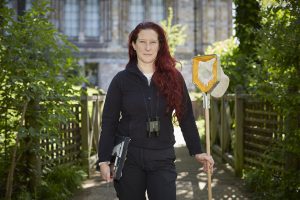 Steph is a bat specialist, but a general natural historian at heart. Having worked across the UK Ecology sector in local government, academia, conservation and consultancy, she is now in her dream job in the Angela Marmont Centre for UK Biodiversity at the Natural History Museum. She has studied bats since she was 12 years old, and remains enthralled by them to this day. While her day-to-day work has mostly taken her away from the subject into entomology & botany, the history of natural history and most recently into genomics and advances in eDNA, bats remain the subject that will always fascinate her the most.