The government wishes to build 300,000 homes per year over the next few years. At the same time, planning guidelines are proposed that any new development should attain a “10% net gain in biodiversity”.

If you create the habitat, the wildlife will turn up: birds, bats and bees as well as amphibians, reptiles, mice and hedgehogs to name a few. The ‘habitat’ will generate food, shelter, places to forage and roost and somewhere to breed.

There is a blind faith that these new green and blue habitats can be maintained for wildlife in the longer term, while often doubling up as amenity areas in close proximity to housing, and that biodiversity will be enhanced.

Robins and blackbirds may find a nest place in a green wall and chaffinches in some of the shrubs. Although blue tits may use the odd nest box put up by a few conservation-minded residents, what about provision for other cavity nesting species? There are no cavities in hermetically sealed dwellings or sapling trees.

According to the net gain rules, cavities are not part of the habitat. There is no means of accounting for the provision of nest boxes in dwellings as part of this process. So swifts, house sparrows and starlings will have nowhere to breed until the fascias fall apart (which will be a very long time as they are typically now uPVC) or the trees are decades old.

All is not lost, however

“Relatively small features can often achieve important benefits for wildlife, such as incorporating swift bricks and bat boxes in developments and providing safe routes for hedgehogs between different areas of habitat.”

There is a range of cavity-nesting creatures that would benefit from integral nesting or roosting sites including several species of birds, bats and insects.

The Royal Institute of British Architects (RIBA) in their book Designing for Biodiversity (2nd Edition) recommends:

“As a guideline, the number of built-in provisions of nest or roost sites per development should be approximately the same as the number of residential units.“

A number of planning authorities have adopted this guideline, which is based on the standard set by Exeter City Council in their award-winning Design Guide, usually in either Supplementary Planning Documents or Technical Advice Notes – for example Cornwall, Oxford, Brighton and Plymouth and South West Devon. Also, the Duchy of Cornwall is implementing this standard on a number of large developments in South West England and is supporting a project to monitor the species that take up these new nest sites.

However, many planning authorities mandate much fewer nest and roost sites than this, typically one for between 10% and 20% of dwellings and in many cases none. Few authorities have the resources to monitor implementation resulting in lack of enforcement when developers do not comply.

Note that there is no conflict between provision of cavities and energy efficiency, as integrated and internal nest and roost sites exist outside the thermal envelope of the building.

It is notable that research by Sarah Roberts on ‘The attitudes of housing occupants to integral bird and bat boxes’ showed that most people regard an integral nest box in their house as a good idea.

Here is a link to a list of commercially available Swift bricks.

Some developers may regard satisfying biodiversity net gain requirements as an inconvenience. Ecologists are often contracted by the developer to make recommendations. One has to ask, is there not a conflict of interest here? We will leave that for you to judge.

Aside from the lack of sufficient numbers, many planning conditions specify an unbalanced or inappropriate provision of nest or roosting sites, for example, the absurd requirement for nest boxes for song thrushes! Song thrushes are quite capable of making their own nests and are highly unlikely to use a nest box!

Frequently large numbers of ‘sparrow terraces’ are specified. A sparrow terrace contains three nest chambers for sparrows. One may see conditions like “10 swift bricks and 20 sparrow terraces” in a 200-house development – that’s 60 nest places for sparrows vs 10 for swifts. There are ~100 pairs of house sparrows to every single pair of swifts in the country. The house sparrow population has been stable for the last 25 years, whereas the swift continues to decline at about 5% per annum. In any case, the sparrows will move into the swift boxes! In the example below, the first pair of sparrows to turn up will go into the Swiftbrick. 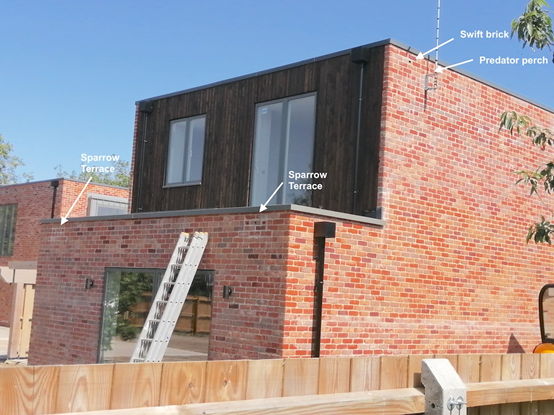 A good example is Fulbourn in Cambridgeshire where 276 swift boxes are home to ~100 pairs of swifts as well as significant numbers of house sparrows, starlings, great tits and even house martins. Fifty sparrow terraces (150 nest places) in the same development contain no sparrows, just the occasional pair of great tits or blue tits.

We are pleased to report that a recent ecologist’s recommendation for 16 sparrow terraces was substituted with 48 S Bricks (swift/sparrow bricks).

The Swifts Local Network (SLN) Swifts & Planning Group has produced a paper advocating the provision of swift bricks as a preferred solution for a range of small cavity-nesting species. It comes from a realisation that this will have better outcomes for these species than trying to satisfy all species independently. 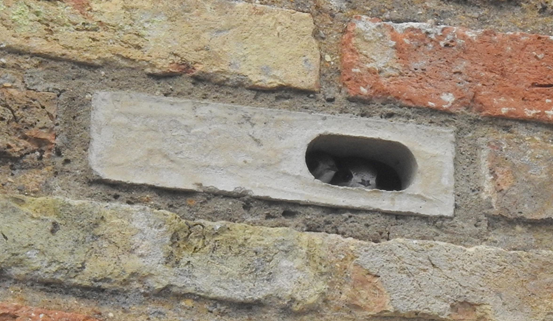 The paper makes the points that integral or internal nest boxes are:

The paper does not address species that prefer open-fronted nest boxes or nest boxes suitable for mounting externally. 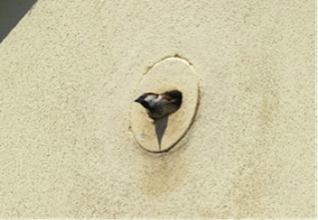 Figure 3. A house sparrow in a swift brick. (Photo: Hugh Hastings and the Duchy of Cornwall)

As we have argued above, the main thrust of the paper is to counter the current tendency to provision large numbers of sparrow terraces. There is mounting anecdotal evidence that they have very low occupancy rates and that house sparrows prefer swift boxes. You can download the paper, written by Camilla Barlow, Mike Priaulx, and SLN Swifts & Planning Group.

What is a balanced provision and where should they be put?

We would not want to be too prescriptive here, but we would suggest the following as a guide. It is common practice these days to have a ratio of 1:2 or 1:1 nest boxes per dwelling. How should they be allocated?

A one size fits all policy can accommodate all of the smaller cavity nesting species:

The built environment is a massive and consistently missed opportunity to connect us with nature. It is also easy and very cheap to deliver.

Sparrow terraces cannot accommodate swifts or starlings, and sparrows are not keen on them either.

I have received useful input on this blogpost from Mike Priaulx, John Willis and Stephen Fitt.

Dick Newell is a lifetime bird watcher with over 60 years as an RSPB member. He is retired from the software industry, and now devotes his time to devising ways to help swifts, which led recently to the BTO giving a Marsh Award for Innovative Ornithology to Action for Swifts. Action for Swifts documents a large number of case studies, designs and ideas.