Bog mosses, Sphagnum, are not only true ecosystem engineers but remarkable species. They hold huge quantities of water, have antiseptic properties, are the major peat former and provide a unique habitat for all kinds of invertebrates. 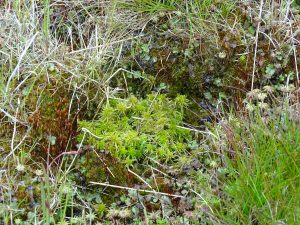 Sphagnum established as a fistful on Kinder Scout as part of vegetation restoration by Moors for the Future on NT land. Image credit: Penny Anderson

It is a general misunderstanding that peat is a sponge that mops up water. It is actually Sphagnum that does just this not the peat, and it can have a strong control over the surface hydrology. This is derived from the leaf structure where large hyaline cells with pores to the leaf exterior hold water surrounded by smaller cells which house the chloroplasts. It has been calculated these large hyaline cells allow the plant to hold 16 to 26 times its dry weight in water (this varies between species). This helps avoid tissue desiccation in exposed or dry conditions, but also keeps the soils beneath wet too, thus benefitting the surrounding plants and invertebrates. Sphagnum plants can draw up water through the peat profile through capillary action, which in turn also helps keep the surface moist and allow more Sphagnum and other peatland species to thrive. Wet soils for example are critical for cranefly larvae survival (and hence peatland bird productivity, for example, Golden plover). The Sphagnum thus has a degree of control and maintains the wetness of the peatland. Lose the Sphagnum to acid rain, as happened in the South Pennines and South Wales from the industrial revolution until air quality improved towards the end of the last century, and peatland degradation, combined with wildfires resulting from the drying effects, has led to bared peat, erosion and gullying – all of which contributed to further drying of the peat. Dried out, eroding blanket bog peat can lose as much as 13tCO2e/ha/yr whilst lowland peatland used for arable land can release a huge 37tCO2e/ha/yr – all of which contributes significantly to climate change.

Sphagnum species can also acidify their environments. The phenols in the Sphagnum walls resist decay by inhibiting bacterial action and the thin surface film on the plant is more acidic, also in turn resisting bacterial degradation. Not all species show the same level of resistance though, with some decaying more quickly than others. Sphagnum typical of flushes tend to decompose more completely, and aquatic ones are also less resistant. It is the terrestrial species such as S. pulchrum, S. imbricatum, S. magellanicum (now three different species) and S. papillosum that are more typical of peat-forming conditions. Since Sphagnum contributes some 99.5% of the material reaching the catotelm (the lower peat horizon below the active acrotelm in which the plants sit), it is the most important peat-forming plant of all. Thus, even if the bog is wet and the cover predominantly of typical peatland plants like cottongrasses, deer sedge or dwarf shrubs, it is the abundance of Sphagnum of the most appropriate species that determines the rate of peat formation. 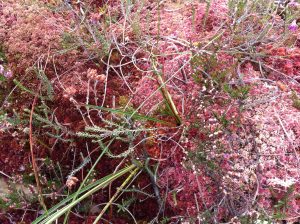 Sphagnum was especially important in the First World War owing to these combined resistance and water-holding properties as an important wound dressing. It could absorb blood and was found to have anti-bacterial properties too – a very valuable attribute at the time. Bags and bags of Sphagnum were collected from the wild as part of the war effort. Sphagnum was also reputed to be an ideal preservative, illustrated by Richard Lindsay (Sphagnum guru, at East London University), who wrapped a fresh piece of salmon in it for several weeks, regally opening it (outside) during a conference, with the salmon seeming as fresh as when it was first wrapped – could Sphagnum have been used by early invaders (the Vikings possibly) to keep food fresh en voyage?

Sphagnum re-introduction forms part of the peatland restoration story in places where these mosses were largely lost in the industrial revolution. Various methods have been trialled, developed largely by Micro-propagation Services (Loughborough). Combining minute amounts of Sphagnum leaf tissue into little beads (Beadamoss), mixing them into a gel applied using a back-pack spray, or growing plugs have all been tried out in plots and at scale. The larger plugs have worked best with good spread subsequently. These techniques can also combine a variety of species, some of which will grow better than others. Less precise has been the technique of extracting clumps by hand from a Sphagnum-rich community and transplanting them (with permission of course) to the receptor site. These have worked well too, but depend on that good source which needs to heal quickly after handfuls are extracted. 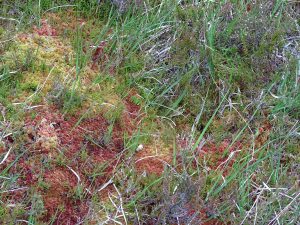 Large-scale plug and hand planting mostly by volunteers has been undertaken on many sites in the Peak District and South Pennines by the Moors for the Future peatland restoration project and by the National Trust. This is one region where Sphagnum was severely affected by former air quality but which is now much improved.  Large scale Sphagnum growing is also being trialled as part of a search for profitable ways of wet farming (paludiculture) on the former mosses and fens where peatland drainage is resulting in massive losses of carbon.