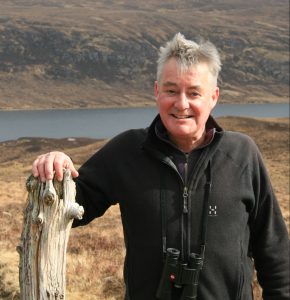 Des Thompson is a highly influential ecologist who has made an outstanding and life-long contribution to nature conservation and upland ecology at both national and international levels. An excellent communicator, a brilliant scientific administrator and an influential advocate for our profession, Professor Des Thompson is an undoubtedly worthy recipient of the 2019 CIEEM Medal.

The CIEEM Medal is our highest accolade and is awarded annually in recognition of an outstanding single or life-long contribution to the field of ecology and environmental management.

Professor Thompson is a strong proponent of the importance of basing conservation practice on sound scientific principles. He has published over 200 papers, articles and books, especially in relation to upland and bird ecology, in which he has earned international recognition and respect. Indeed, he has been involved in almost every aspect of upland conservation throughout the British Isles over the past 30 years, including as founder chairman of the Scottish Raptor Monitoring Scheme. His books, many of them published collaboratively, include Ecological Change in the Uplands (1988), Heaths and Moorland – cultural landscapes (1995), Birds of Prey in a Changing Environment (2003), An Illustrated Guide to British Upland Vegetation (2004), The Nature of the Cairngorms: Diversity in a changing environment (2006) and Scotland’s Birds of Prey (2010).

He not only administers, but also strongly influences nature conservation policy, initially for the UK, through the Nature Conservancy Council (NCC) and the Joint Nature Conservation Committee (JNCC), and in recent years for Scotland, as Principal Adviser on Science and Biodiversity for Scottish Natural Heritage (SNH). He regularly provides advice to Ministers and civil servants in the Scottish Government, which undoubtedly influences the political approach taken to conservation issues. At an international level he was, in 2014, elected Chairman of the Technical Advisory Group advising the United Nations Convention of Migratory Species work programme on the Conservation of Migratory Birds of Prey in Africa and Eurasia.

His work demonstrates both the breadth and depth of ecological expertise and contribution to the field. His primary research interests are in upland and Arctic-alpine ecosystems, health, conservation and dynamics and on the value of nature. He is an associate editor for the Journal of Applied Ecology and has extensively presented at conferences in the UK and internationally. In 2015 he was elected a Fellow of the prestigious Royal Society of Edinburgh. He also gives generously of his time as a Fellow of CIEEM, writing articles for In Practice and chairing, with gentle authority and wisdom, numerous disciplinary boards. He is also a very active Chair of the Field Studies Council, a charity dedicated to providing outdoor environmental education.

The CIEEM Medal will be presented to Professor Thompson at the annual CIEEM Awards Luncheon, this year held on Thursday 27th June 2019 in London. This year’s guest speaker is David ‘The Urban Birder’ Lindo.

More information about the Awards and the finalists for all of the Awards categories.