We are delighted to announce that Roger Crofts is now a CIEEM Patron. In his role Roger will act as an ambassador for CIEEM and the profession, especially with regard to Scotland.

I am delighted to be appointed a CIEEM Patron. The Institute continues to grow in stature and influence, and our members demonstrate a thoroughly professional approach in their everyday work. There has never been a more important time to stand up for nature, learn from it in instituting new policies and increased incentives, and improving practice on the ground. And it is vital that we continue the battle against outmoded approaches and bad practice which works against nature and undermines the future for short-term gain. 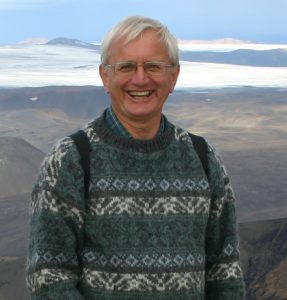 Roger Crofts CBE FCIEEM has an international reputation for his work on protected areas and environmental management, and his engagement in strategic management of a large and diverse range of influential organisations. As Founder CEO of Scottish Natural Heritage, he instituted schemes of positive management agreements with owners of protected sites and led a major programme of Natural Heritage Futures which still forms the basis for strategy. Roger was Chairman of the IUCN UK Committee and of its World Commission on Protected Areas (WCPA) European Region. He persuaded colleagues to enlarge the international definition of a ‘protected area’ to include ‘nature’, and led the establishment of an international specialist group on geoheritage and the first IUCN publication on geoconservation. He has travelled widely and brought his knowledge to bear in his longstanding work in Scotland and Iceland particularly. He has written, spoken and advised on improving care for the natural environment and on protected areas advising governments on protected area management in Bulgaria, Denmark, Lithuania, Slovakia and Slovenia. In retirement he advises, lobbies, writes and talks to anybody who will listen in Scotland, Iceland and Europe on environmental strategy and policy, geoheritage conservation, protected areas and good governance.

Roger has demonstrated leadership and vision on natural heritage, especially in Scotland. In the late 1980s he developed new ideas for managing conflict in nature conservation, developed a strategic vision, and articulated this in a highly regarded White Paper approved by Scottish Ministers.  Roger led the drafting of the subsequent Bill which was then accepted by both Houses of the UK Parliament, becoming the Natural Heritage (Scotland) Act 1991.  Roger won the public competition for the role of Founder CEO of Scottish Natural Heritage (SNH) in 1992. Resolving the tensions of merging the predecessor bodies, he established the conservation agency over the next decade, putting in place governance structures and management schemes for nature protection. He presided over the implementation of Natura 2000 giving rise to extensive networks of SPAs and SACs. During that period, he also forged changes in the attitudes and mindsets of staff and Board members and many stakeholders, stimulating the development of modern, cost effective mechanisms for dealing with management of nature and for devising and leading the implementation of Natural Heritage Futures, which is still the foundation for natural heritage strategy and action documents for Scotland.

As Chairman and now a Vice President of the Royal Scottish Geographical Society, Roger was instrumental in plans to develop a national academy for geography.

Roger’s contribution to management of the environment has been recognised through numerous awards. He was made a Commander of the British Empire (CBE) in 1999 for his services to environmental management.

Supposedly now in retirement, Roger has continued to be actively engaged in strategic management and governance of a large and diverse range of environmental NGOs including Plantlife, Fieldfare, National Trust for Scotland, Crichton Carbon Centre, Galloway & Southern Ayrshire Biosphere Reserve, Scottish Rural College, the Sibthorp Trust, and most recently the Royal Society of Edinburgh.

Find out more about Roger at www.rogercrofts.net.