As ecologists and environmental managers, understanding and implementing policy and legislation is a key to our work.  This is more important now than ever, as we live in precarious times, a climate and biodiversity emergency[1], leaving the EU, and more recently the COVID-19 crisis which has permanently changed life as we knew it.

The overwhelming majority of news coverage currently relates to the state of the economy, international politics and domestic issues. Environmental policy, particularly that relating to biodiversity is often underreported. How many news articles have you seen recently on the proposed Environment Bill?

As we know, biodiversity is on a decline in the UK, with the latest rating putting us 189th out of 218 in the world’s most impoverished nations for wildlife, and the recent State of Nature report[2], cements the fact that we need solid policy to ensure that our environment is safeguarded and provides us as ecologists and environmental managers the direction for our work. While understanding the need for planned growth in housing, commercial and other land use change, we need a long-term strategy for halting biodiversity decline[3].

A few years ago, when I started as a committee member for the South East Committee, I wondered why, with such a wealth of knowledge on the committee, covering academia, government, NGO and local planning authorities, we were not using this knowledge, and exploring how we as a regional group could harness this expertise and realise my ambition of contributing to CIEEM’s engagement in policy.

I contacted the CIEEM policy team and asked whether we could begin to use such knowledge to aid our members. This was warmly welcomed and in January 2019, I gathered the committee together at Southwark Council, where one of our members, an LPA ecologist, was based.  We discussed the questions and went over key topics. We put together a response as a committee, and sent this over to our CIEEM policy team, which was gratefully received, and formed part of the inquiry and consultation response for the governments mandatory biodiversity net gain proposals[4].

Following this, several other responses to consultations followed including Management Measures for Widely Spread Invasive Alien Species (IAS) in England and Wales, and the Environment Agency’s Challenges and Choices, River Basin Management Plan, and the London Environment Strategy, collaborating with the Landscape Institute’s response. That combination of knowledge and experience means that key issues, such as invasive species management are tacked, and ensure that the government is receiving professional advice from those within the industry, that will then form a key part of the work we do in our industry.

Why do it? The answer is simple, if we are going to positively influence the guidance, policy and legislation, we use on a day to day basis, that ultimately we as environmentalists want to see a long term gain in our nature conservation, then consultation is ‘prime time’ for such actions. Furthermore, it ensures that our views are represented to other stakeholders, it is easier to do so under the same umbrella in your institute than as an individual.

We have a wealth of knowledge as CIEEM members, we need to use this where it matters, no matter how big or small. It’s an opportunity also to share common views on a subject or particular policy matter with other professions, such as IEMA or the Landscape Institute.  You could argue that if you want something changing, that our input won’t make a difference. However, if several organisations pushing the same change, that can be a game changer.

Since then, I have been accepted on to the CIEEM Wales Policy Group, following my relocation to Cardiff, this role now allows me to see change on both sides of the border. The focus of these groups is to provide leadership in delivering CIEEM policy positions, draft responses to country specific issues, develop positions statements, and work and collaborate with relevant stakeholders to ensure that our views as members are presented. It is also about building relationships, with relevant partners and decision makers, including the devolved governments in Wales, Scotland and Northern Ireland.

I hope this has given you an overview of what it’s like to be a volunteer within CIEEM’s policy activities and I would recommend getting involved. Now more than ever we need to stand out as a profession in the work we do, and can come together to implement our policy ambitions.

If this would interest you, send your CV outlining your experience for consideration to Jason Reeves or Amber Connett at policy@cieem.net. 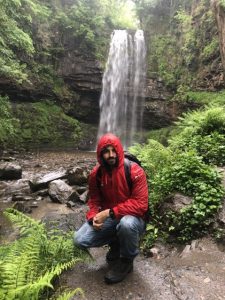 Craig has 9 years’ experience in ecological consultancy, currently working as a Senior Ecologist at AECOM, he specializes in NVC habitats, and carries out protected species survey assessment for a wide range of species.

Craig currently sits on the CIEEM Wales Policy Group, and is the Convenor of the South East Committee, his role involves responding to consultations, assisting in position statements, and engaging with other stakeholders, in particular LPA ecologists, the Landscape Institute and Forestry Commission.