The pressure is on to plant trees, but as the Woodland Trust say on its website: plant the right tree in the right place. One place that is not right are grasslands that are rich in specialist grassland fungi. If you don’t know your CHEGDs, this stands for the key fungi groups involved: spindles, club and coral fungi (Clavarioids), the waxcaps Hygrocybe genus (although recent DNA investigations have split up the genus), pinkgills (Entoloma), earthtongues (Geoglossum and relatives), and crazed caps (Dermoloma and relatives). The waxcaps produce often brightly coloured, generally quite small toadstools with waxy or slippery caps, thick waxy gills and are thought to be largely saprophytic, although some may be mycorrhizal possibly associated with mosses such as Rhytidiadelphus squarrosus and Ribwort Plantain, Plantago lanceolata. Acid grasslands rich in fungi are also likely to be good carbon stores associated with the hyphal mats, all of which would be destroyed if ploughed, or otherwise disturbed and planted with trees.

Generically labelled waxcap grasslands for short, these have been widely lost owing to agricultural improvements and to nitrogen pollution and nearly 90 per cent of all waxcap species are on one or more European national Red Lists for threatened fungi. The threatened state of these and their CHEGD fungal assemblages was only realised in the 1980s.  Subsequently, surveys showed that Britain has more valuable waxcap grasslands than any other European Country, which emphasises their importance and the very significant contribution our sites make to their conservation. New sites are being found in the Peak District, in the Northumberland National Park and across the Welsh uplands to name a few places, but significantly they nearly all focus on unimproved upland acid grasslands. This may be on acidic rocks but acid grasslands also occur on the limestones, such as in the Yorkshire Dales and Peak District on north-facing slopes or in areas of high rainfall and leaching. Other good sites occur on long-established lawns around stately homes and in cemeteries. 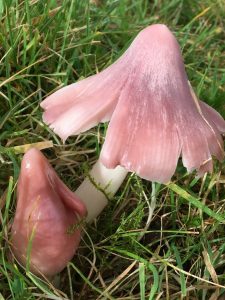 Pink or Ballerina waxcap in acid grassland in the Staffordshire Moorlands

A warm summer and wet autumn heralds a good waxcap year like 2020. Talking about these in spring might appear odd, but it is essential to be able to identify potential sites at any time to avoid them being destroyed by habitat change. The best grasslands for the CHEGD group are not necessarily flower-rich and they may easily be dismissed as of little nature conservation value if only higher plants are considered. But those grasslands that are not agriculturally improved through liming or fertilising and which may be mossy, especially with abundant Rhytidiadelphus squarrosus and generally short in autumn through grazing (after hay cropping or as permanent pastures) can support the largest assemblage of waxcaps and their associated fungi. To understand the importance of your site, refer to the recent JNCC 2018 publication on site assessment which includes criteria for analysing site value, or to the older NE report 2004 on the assessment of English waxcap sites. Gareth Griffith, of Aberystwyth University, described modern DNA barcoding as a tool for fungal conservation in IP June 2013 and co-authored a paper on sward management for waxcaps in 2012. 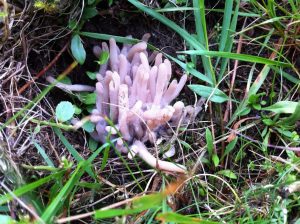 A brief overview demonstrates just how varied and colourful the CHEGD can be. One of the commonest is the orangey-brown Meadow Waxcap (Cuphophyllus pratensis), growing in small troops amongst grasses. Parrot Waxcap (Gliophorus psittacinus) is smaller, sticky, glistening and always with some greenish colouring (photo). The Scarlet Waxcap (Hygrocybe coccinea) has a moist, domed cap and red or yellow gills, whilst the Golden Waxcap (Hygrocybe chlorophana) reflects its name. Snowy Waxcap (Cuphophyllus virgineus), also widespread, has a white (usually), moist cap and stem. Some species, such as the Heath (Gliophorus laetus) and Splendid Waxcaps (Hygrocybe splendidissima), thrive better in acid sandy soils, whilst others like the Pink or Ballerina (Porpolomopsis calyptriformis) and the Oily Waxcaps (Hygrocybe quieta) prefer more neutral areas with deeper soils, often towards the bottom of slopes. Citrine Waxcap (Hygrocybe citrinovirens) prefers wetter conditions, whilst the Egg-yolk Waxcap (Gloioxanthomyces vitallinus) favours peaty soil at moorland edges. 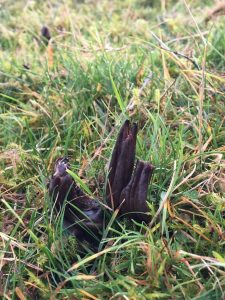 Some pinkgills (a large group) have some bluish, lilac, violet or bluish-grey colouring, whilst others are more dull-coloured. They have pale, crowded gills in their mushroom-like cap and are difficult to identify. The Earthtongues (Geoglossoid fungi) are simple tongue or club-shaped structures which are blackish, green, purplish or even dark red. Geoglossum and Microglossum have smooth fruiting bodies whilst the Trichoglossums are covered with tiny bristles (visible through a lens). All the Microglossum species are rare. Crazed caps (Dermoloma and similar) are dry-capped mushrooms with cuticles that crack in a crazy pattern when flexed.

Remember to think CHEGD at any time of year when assessing sites and look out for their colourful displays in autumn from August well into November.

Let us know if you would like some field trips to explore and learn more about these wonderful fungi?

Griffith, G., (2013). DNA bar-coding as a tool for fungal conservation: fast and economical identification at any time of year. In Practice 80, 35-36.