St Helena is a UK Overseas Territory that rises out of the South Atlantic, 2,000km off the coast of West Africa. Its position in the world has given it a very unique biodiversity. But it suffers from many of the same threats that occur on the mainland UK, including climate change and invasive species that are both having a significant impact on the island’s biodiversity. I was lucky enough to work with St Helena Government on St Helena in 2017 on a project to map Saint Helena’s biodiversity, soil and natural environment. Environment Systems worked with partner organisation, Aberystwyth University and Environmental Management Division (The Endemic Plant Nursery on St Helena) with funding by UK Government under the Darwin Plus programme (DPLUS052). It was a privilege to visit and work on this amazing island with its rare, endangered and very unusual plant species. Using a combination of remote sensing, ecological rules and field work we produced a complete habitat and soil map for the island in 2018. 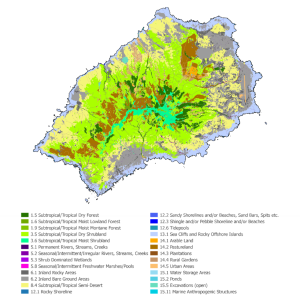 Figure 1 Habitat map of St Helena 2018 created by Environment Systems as an out from DPLUS052. The remnant cloud forest can be seen in bright turquoise running across the spine of the island

St Helena is one of the most isolated islands on Earth; a volcanic tropical island in the South Atlantic Ocean with environmental landscapes ranging from deserts to cloud forests. The island’s habitats consist of barren coastal fringes, dry and rocky wastelands on the outer part of the islands.  Moving inland, scrub, woodland and wetlands, together with agricultural habitats occur. At the centre of the island on the highest ground are densely vegetated cloud forest. Cloud forests cover less than 0.4% of the world’s land area but are home to an estimated 15% of all species. Sadly, cloud forests are in global decline- having decreased 20% in areas over the last 40 years, while St Helena’s cloud forest has declined from an estimated 600 hectares before humans’ arrival to just 16 hectares today. 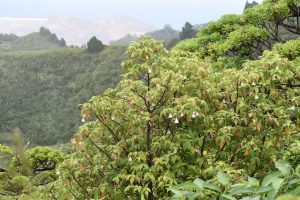 The island was first discovered in 1502 and was used for refuelling and as a restocking station, the early travellers left goats on the islands, so that they would have food when they stopped over. The goats quickly escaped the enclosures and ate and altered much of the native flora. Later as the island became a key stop on the route of the East Indies Company, the native trees were cut down and used as fuel and timber. Soil erosion became a key issue, and it was said that in the 18 Century sailors navigated to St Helena by following the sediment trail in the sea.

The cloud forests are one of the most unique habitats left in St Helena they are valued by the island and by visitors and have been voted one of St Helena’s ‘Seven Wonders’ as they offer a unique wilderness experience. They contain an outstanding habitat containing one sixth of the UK’s total endemic biodiversity (approximately 250 unique species) endemic species.  They are kept moist by the oceanic winds rising over the peaks at over 800 meters and forming rain and mists which condense on the native species, running down the leaves and stems and filtering into the aquifer via the peaty soils. The steep terrain has enabled many endemics to survive, however, even here invasive alien species such as  New Zealand Flax Phormium Tenax are now encroaching on the peaks. These alien species are endangering not only some of the most vulnerable endemic species in the world, but also are having an impact on the island’s water supply as the invasive plant species do not capture and store as much rainfall as the native species. 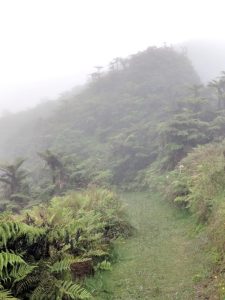 The cloud forest is now the focus of a multi-year restoration project lead by the St Helena Government, working with the RSPB and the St Helena National Trust and Connect St Helena with a wide range of other partners both on island and from the UK. Funded by the UK Government’s Foreign, Commonwealth and Development Office through the Conflict, Stability and Security Fund: Environmental Sustainability and Climate Change Programme until March 2025, this project draws on lessons learnt from cloud forest restoration projects across the world. Specifically invasive alien species will be removed and endemics species restored with the aim of protecting and safeguarding both the endemic species and the water resources for the island.

Almost half of the island’s fresh water is provided by the cloud forest’s high peaks, with 60% of that being obtained via mist capture. Climate change projections for St Helena predict a major increase in severe drought events. The restoration of the cloud forest is therefore critical to help the island survive the increasing periods of drought being predicted with climate change.

The project has three main pillars:

Now into the second year the project has had some major successes. For example, the project team has set up of a world-class micro propagation laboratory at the EMD Nursery at Scotland (St Helena) to help propagate some of the most vulnerable and difficult to propagate endemic fern species. Areas on the peaks have already been cleared of invasive species and native endemic species have been reintroduced. The Saint Helena National Trust has found that endemic species such as the spiky yellow woodlouse (Pseudolaureola atlantica) have moved into the newly restored areas of Cloud Forest habitat. The migration of these native invertebrate species shows the success of habitat restoration techniques, giving an indication of habitat health and the distribution of the species.

Related to the overall project and the work of the EMD endemic nursery is the recovery of the She Cabbage tree (Lachanodes arborea). This species was thought to be extinct until it was rediscovered by George Benjamin in 1976. Seeds from this plant were planted at suitable sites, but the last wild trees died in 2012 making the species officially extinct in the wild. However, the plant was kept alive in living gene banks with a couple of hundred seeds collected and grown on over the next 16 years. In 2021 the Terrestrial Conservation Team at the Endemic Nursery collected 20,000 seeds and nearly 17,500 were potted out – a great resource for the restoration efforts. A locally produced film about She Cabbage restoration won the Earthbeat Impact Award at COP26.

If you would like to find out more about this exciting project and the wonderful biodiversity on St Helena, do come along to the Overseas Territories SIG webinar on Wednesday 30th November at 4pm where the Project Manager Kirsten Ellis and Shayla Ellick St Helena Cloud Forest Project Co-ordinator will present on the project and will be able to answer any questions you may have. The link to the webinar sign-up page is here:

Book your ticket to the webinar here