When I agreed to write this blog back in January, the world seemed a very different place. Then suddenly nature bit back – and bit back hard, reminding us of just how inextricably linked the health of the natural environment is to the health of the human race. The short-term economic impacts of COVID 19 will, as we know, be huge, but how will governments respond to the clarion call to avoid this ever happening again? Time will tell of course, but there is no doubt that working with nature rather than against it, is now more important than ever, and so I would argue that the subject of this blog is even more pertinent than it was 5 months ago.

I joined Rewilding Britain as Director in Jan 2017 after 34 years in public service, having started as the first Conservation Officer for the Thames Water Authority in 1984 and finishing as the EA’s national Head of Conservation. When I joined this tiny organization, I knew I was embarking on a really exciting new chapter in my career, but I had no idea just how rapidly the interest in rewilding was about to escalate. I put this down to the perfect storm of (i) societal realisation that we really do have both a climate emergency and a biodiversity emergency – not the same, but connected in many ways (ii) the government’s commitment to a move away from basic payments for farmers to the public money for public goods approach (iii) the publication of the superb “Wilding” by my good friend Isabella Tree, which tells the inspirational story of the Knepp rewilding project and (iv) the increasing influence of Rewilding Britain – or so I like to believe! It is our intention to remain small and agile and to act as a catalyst for “mainstreaming” rewilding and I view our best future measure of success as basically doing ourselves out of a job – ie to get us to the point where all eNGOs, government agencies and landowners etc “get” rewilding to such an extent that our 1 million hectares in Britain target has been achieved. That’s app 5% of Britain, but we’re a long way off that yet with less than 1% rewilding so far, so I and my colleagues have still got plenty of work to do!

Now no-one owns the term “rewilding” and you’ll see many definitions out there, but we at Rewilding Britain summarise it as “The large scale restoration of ecosystems to the point where nature is allowed to take care of itself”.  I should emphasise here, that rewilding is a long-term process – and can involve a spectrum of activity from, for example, my tiny garden wildlife pond through to 100,000 ha blocks of completely unmanaged countryside – which of course we don’t yet have in the UK. In other words it is an activity to which we can all contribute, but we must be bold enough to move along that spectrum significantly further than we have yet done, both in terms of scale, and in terms of reduction in management.

Having said that, the definition alone is not enough to understand exactly what rewilding is and how it can work. The principles are equally important and as far as Rewilding Britain is concerned these are as follows:

(i) People communities and livelihoods are key

(iv) Benefits are secured for the long term

Above all, we believe that there doesn’t need to be an “either / or” choice between rural culture and livelihoods and nature’s wellbeing. With new approaches and support from government it should be possible to restore nature and give people who rely on the land for their livelihoods, new avenues of opportunity.

We are now pursuing a mix of rewilding initiatives from really large scale 30,000 – 50,000 ha vision areas, mainly in the uplands, within which there will be core areas of rewilding, buffered by large nature recovery areas with a mix of sustainable farming and protected sites, and at the other end of the spectrum, large estates or “farm clusters” where part of the land is given over to rewilding (typically so far, over an area of 400-4000 ha) – broadly similar to that at Knepp. The list of these estate-scale initiatives is growing on an almost weekly basis – two years ago we were seeking ways in to speak to potentially supportive landowners and now we can’t keep up with the demand – a nice problem to have! And as a result of this huge upsurge in interest, we are now establishing a Rewilding Network which will be Britain’s first learning and action network dedicated to helping people put rewilding into practice. The network will provide guidance, support and access to expert knowledge and it will enable people to share experiences and learn from each other through online discussions, events and face-to-face meetings.

Following on from the success of our petition and parliamentary debate last year calling for the government to invest in nature recovery on a massive scale to help mitigate climate change, and the Nature for Climate Fund announcement that followed in the March budget, we are also now developing a bold vision for tackling climate change which brings scale, ambition and connectivity to existing conservation and mitigation efforts. Please keep an eye on our website www.rewildingbritain.org.uk and our Twitter feed @RewildingB for further details in due course.

I have worked in UK conservation for 42 years now and I know many eNGOs, landowners and government agencies have done truly amazing work to conserve our natural heritage for many decades. Goodness knows what state our biodiversity would be in if they hadn’t, but the simple harsh truth is that traditional nature reserve and protected site conservation on its own is not enough to reverse the decline in biodiversity. We need something significantly larger in scale and less intensive in management, to sit alongside the ongoing conservation of our nature reserve hotspots, to ensure that we exist in an environment that is fit for the future. That “something” is rewilding, but in a crowded country like ours, it desperately needs people to make it happen quickly and many CIEEM members will be those very people. No pressure there then! 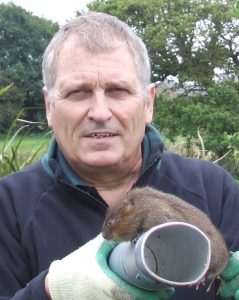 Prof. Alastair Driver is well known in conservation and catchment management circles. He was appointed as the first ever conservation officer for the Thames catchment in 1984 and held that role for 18 years.  Alastair was Head of Conservation for the Environment Agency 2002-2016. Alastair is now Director (England and Wales) for Rewilding Britain. He is a Fellow of the Institute of Ecology and Environmental Management and is an Honorary Professor in Applied Environmental Management at the University of Exeter.