As an Ecology and Environmental Science student, I have full knowledge of how overwhelming the prospect of applying for a graduate position can be. I have scoured career pages, job websites and social media for any information possible on how to get the career that I have always wanted.

As a 34-year-old mature student with three young children, I had concerns about the prospect of gaining employment post-university. When I was offered the opportunity to explore the main difficulties of gaining employment in the ecology sector (through an internship module) I was interested to see if my concerns were justified and to hear other people’s experiences of gaining roles within ecology.

The research conducted included searching for current job opportunities on various job sites, to see what skills most companies were asking for and a survey that was posted on a social media site for ecologists. The survey had 209 participants and produced a great insight into the difficulties of gaining a position at an assistant or graduate level.

Common themes seemed to occur within the job searches – 89% of the jobs that were advertised wanted the candidate to have a full driving licence and this was the most common skill that potential employers wanted their candidates to have. Other skills that were important and recurring in many companies included good report writing skills and they wanted their candidates to have gained or be working towards one of the European Protected Species licences. One of the assistant positions wanted their candidate to have at least three seasons of survey experience before applying for the position. A postgraduate degree was desirable but not essential for all positions.

Difficulties to be examined in the survey

I wanted to examine each difficulty individually and statistically test the proportion of candidates for roles that may have had a specific skill and compare those who had gained a position with this skill to those who did not have a particular skill. For example, the number of potential candidates who had a driving licence and who had secured an ecology position compared to those who did not. The factors that were examined included the candidate’s level of education, if the candidates had volunteered, possessed a driving licence or had any seasonal experience of working within the ecology sector. I have noticed that many ecology positions are advertised as “seasonal” and this may be a difficulty for some potential candidates who have financial commitments, so I wanted to incorporate this into the survey as well. I also compared those who had gained positions with the level of education that a potential employee had, to see if higher degrees significantly enhanced the chances of gaining employment within ecology.

Many commented that they felt that competition meant that more privileged individuals were gaining positions as they were able to afford funding for skills and that individuals on a low income had an unfair disadvantage. Others already had full-time jobs and felt like they could not afford to leave their current position for a more temporary position. Many commented that they could not afford to relocate to where positions were due to financial or family ties.

My main advice to anyone who is looking to gain a position within ecology based on this research would be (particularly if you are a student) to forward plan. Get a driving licence as soon as you can and try and use seasonal positions within ecology to fund the lessons and any extra training. Take advantage of any free training opportunities. Many volunteering opportunities offer free training – if you can find training that works from home or training that is near to home then this takes away some of the pressure of owning a vehicle. Each person trying to gain a position into this sector is going to have separate circumstances and some may have several factors that are potential obstacles for them.

I cannot recommend the CIEEM mentoring platform enough. I have a lovely mentor who has been brilliant in answering any questions that I have on CVs and application processes etc. A mentor may also be aware of any free training opportunities within the industry.

Best of luck to anyone trying to gain a position. I will be applying myself within the next few months so I will have first-hand experience. Wish me luck. 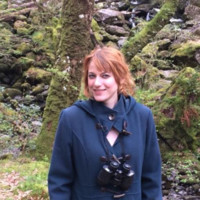 Anouska Laramy is a third year Ecology and Environmental Science student at the University of Gloucestershire and lives in Winchcombe, Gloucestershire. She has hopes of gaining an assistant ecologist position soon and she has a particular passion for ornithology. In her spare time, she enjoys walks with her family and discovering new places.