What are coral reefs?

Coral reefs are massive limestone underwater structures composed of the skeletons of colonial marine invertebrates that belong to the phylum Cridaria and are called polyps. There are two groups of corals: hard corals, or hermatypes, which form reefs and soft corals, or ahermatypes.

Hard corals have microscopic algae, called zooxanthellae, living within their tissues in a mutualistic symbiotic relationship. A coral polyp has a sac-like body and an opening, or mouth, encircled by stinging tentacles called nematocysts or cnidae. The polyp uses calcium and carbonate ions from seawater to build itself a hard, cup-shaped skeleton made of calcium carbonate (limestone). The Zooxanthellae algae lie protected in this structure and by photosynthesis supply the polyps with food and oxygen. Polyps are usually nocturnal extending their tentacles to feed at night and most have clear bodies. Their brilliant colour comes from the zooxanthellae living inside their tissues.

Reefs are made as the coral polyp colonies secrete layers of calcium carbonate beneath their bodies. The entire colonies can grow very large, though they generally grow slowly, typically increasing in size by just a few centimetres per year.

Soft corals, or ahermatypes, are flexible organisms often resembling plants and trees, and include species such as sea fans and sea whips. They add to the diversity of the reefs, providing refugia for many species of fish.

Coral reefs are biodiversity hotspots, covering less than 1% of the world’s seafloor but containing 25% of all marine species.  They are found in all the world’s oceans, from the cold waters in the UK to the warm tropical waters of the Caribbean Sea.

Why are they important? 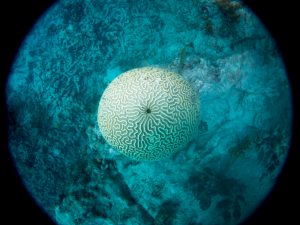 Reefs support biodiversity, tourism and fisheries, and the reef structures provide significant protection from storm events. Coral reefs may support the highest biodiversity of any ecosystem on the planet, providing spawning, nursery, breeding, and feeding grounds for numerous organisms. The iconic reef species, such as parrotfish, grouper, shark and the many species of smaller fish are so attractive that they form the basis of a multi-billion-pound tourism industry. Over 800 hard coral species and more than 4,000 species of fish are recorded, but there are many unknown and undescribed aspects of reef biodiversity, in particular the small organisms living with corals.

Coral reefs play a particularly important role in storm protection. Healthy reefs can absorb up to 97% of a wave’s energy (Ferrario et.al. 2014)), buffering coastal communities from storm waves, flooding, and erosion. The more complex the structure of the reef (the rugosity) the stronger the effect on dissipating wave energy.

A variety of risks threaten their survival; the greatest being climate change.  In the last three decades, the loss of over a quarter of the world’s coral reefs has been attributed to climate related issues; sea level rise, changes to the frequency and intensity of tropical storms, altered ocean circulation patterns, and rising temperatures.  When sea temperatures rise, the delicate zooxanthellae that give reefs their characteristic colour die; mass coral bleaching has killed large areas of reef.

The anchoring of yachts and cruise ships can damage coral reefs. Sedimentation is also an issue, as nutrient rich soil from the land ends up deposited on reefs, changing the ecosystem and causing algae to out-compete the coral species. Sedimentation is often worse where development occurs within the coastal zone as the building work leaves soils prone to erosion during storm events.

When combined, these impacts dramatically alter ecosystem function, as well as the goods and services coral reef ecosystems provide to people around the globe. 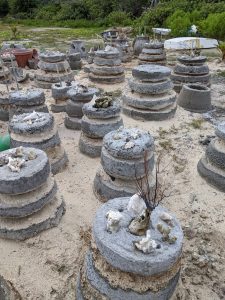 Coral reefs are natural ecosystems that we can take action to preserve, both for the health of the ocean and for our safety.

Reducing carbon emissions remains a core long-term activity but other, immediate, practical action can be undertaken to reduce and deal with known risks and issues:

Capacity development can include community and citizen science work to convey the importance and significance of the reefs, and any action that can be taken to protect and restore them.  As part of Defra’s Darwin Plus programme, Environment Systems Ltd is working with the Department of Disaster Management Anguilla and The Anguilla National Trust to model and map where reefs are supporting particularly important areas of infrastructure, and where restoration of reefs, dune and mangroves can help protect the marine and terrestrial environments.  In addition, the project is assessing where restoration activities could be targeted to ensure the greatest likelihood of success.

This information is being used to plan protection and restoration activities, with action identified for both the terrestrial and marine environment. This includes identifying potentially damaged reefs for restoration work and then finding locations within these that are suitable for translocation of reef species to support reef recovery (e.g., by siting reef balls).  By developing an understanding of the bathymetry and effect of waves, the project has identified sheltered waters which allow coral to develop. Identifying areas responsible for high sedimentation loads will allow action on land to help reduce erosion and the damage this causes to the reefs.

If you are interested in finding out more or supporting coral reef restoration efforts the following links will be of interest:

The CIEEM UK-OT SIG is always interested in encouraging new membership, so please get in touch if you would like to join us or be included in our mailing list. You can find out more about what we do bu watching our Overseas Territory Special Interest Group Autumn Conference Sessions on YouTube. 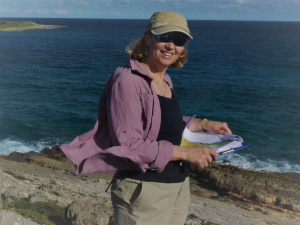 Dr Katie Medcalf CEnv MCIEEM is Environment Director at Environment Systems Ltd. She has a strong background in environmental monitoring, mapping, modelling, field ecology and remote sensing.  Katie leads, and develops Environment Systems environmental opportunities and risk modelling. She has been working in the Caribbean UK Overseas territories for over 8 years, helping provide critical environmental data considering ecosystem services, natural capital and the impact of climate change. Katie is a Chartered Environmentalist, a full member of the Chartered Institute of Ecology and Environmental Management, the British Society of Soil Science and the British Ecological Society. She is convenor of CIEEM OT’s SIG  and is passionate about helping the OT’s preserve, understand and protect their internationally important biodiversity and wonderful terrestrial and marine environments.