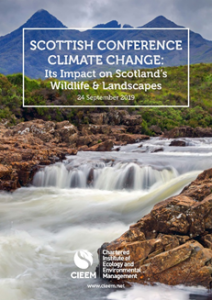 Over 100 delegates gathered in Stirling for the 2019 CIEEM Scottish Conference on Climate Change last week. The profile of climate change and the impetus for addressing it has certainly risen further since the selection of the conference topic in 2018. There were excellent presentations across a kaleidoscope of topics and perspectives which stoked many conversations on how we can address these issues going forward.

Mitigation and adaptation measures were outlined as part of “Farming for a Better Climate” by Rebecca Audsley (SAC Consulting), helping farmers improve business performance, whilst contributing towards Scotland’s net-zero emissions targets and wider benefits for biodiversity and water quality. We even learnt about novel ways to measure soil microbial activity by burying underpants or vests! Elaine Fotheringham delved into SEPA’s strategy for “Delivering Climate-Resilient Places: Considering Climate-Change in Flood Risk Assessment” and Joanna Wright (LUC) took us through Environmental Impact Assessment and how it links to climate change: “every EIA team should have a practitioner who is knowledgeable about future climate scenarios”.

The next focus was on uplands with Andrew McBride (SNH/Peatland Action), highlighting the impacts of climate change on our peatlands and the many benefits of healthy, restored peatlands, with Chris Cathrine (Caledonian Conservation Ltd) giving us an overview of reptile survey and mitigation in these areas, particularly during peatland restoration.

Dave Genny (SNH) showed us why Scotland’s high-altitude snowbed habitats are at the sharp end of climate change and how the Scottish Snowbed Vegetation Monitoring Network has helped us to understand impacts and potential solutions. Should we be considering translocation?

Poster presenters gave short “elevator-intros” to their work on Scottish habitats.  The afternoon started with a keynote talk from Gillian Martin MSP, Convener – Environment, Climate Change and Land Reform Committee: “There is an urgent need for transformative change and the duty (and opportunity) we have to transform Scotland into a low carbon country leading the way.”
“Climate change targets and policy need actions at all levels and throughout ALL government portfolios. Accountability and responsibility are key.”

Kenny Kortland (Forest and Land Scotland) talked about habitat preferences of Capercaillie and modelling their responses to climate change “Capercaillie are very perceptive of climate conditions and bog reinstatement should be a priority”.

We learnt from Craig Macadam (Buglife), that there really “Ain’t No Mountain High Enough” for some species such as the upland summer mayfly and other freshwater invertebrates, that have already disappeared from lower altitude streams and are being pushed further upstream as water temperatures rise. From the uplands to the coast, Tom Dargie (Boreas Ecology) discussed the use of dune and salt marsh habitats as warning signals for Climate Change, another great example of the use of long-term datasets to track change. Professor Stewart Angus (SNH) closed the conference, and whisked the audience away to western Uist, and the importance of interconnected habitats – from kelp beds to dune and machair systems. Inland, aquatic connectivity has been subject to significant management that now has major implications for how the islands might respond to climate change. Socio-economics and environmental history have to be considered to understand how these islands will respond to climate change in the future.

At the conference attendees were asked to imagine they were the Scottish Environment Minister and given £10m of funding (in tokens) to allocate to combat climate change effects. Delegates throughout the day allocated money which was later totaled (results in brackets):

Key messages from the other ideas pot very much related to climate change education in schools, better communication about problems and solutions and promotion of ‘easy’ actions for everyone. Others included:

Thanks to everyone who took part, it certainly got some discussions going on how to prioritise spending.

Thanks to all our speakers, the CIEEM Scotland committee and of course to all the delegates who made it an important conference  which developed ideas with a reach far greater than Scotland.  The following day the Scottish Parliament voted unanimously for 75% reduction of emissions by 2030! This means huge positive changes to the way we live our lives in Scotland. https://www.bbc.co.uk/news/live/uk-scotland-scotland-politics-49795289