Rewilding Britain has released a new report claiming that Britain’s climate zones are shifting 5km a year, and that a nature recovery era is needed to avert a wildlife catastrophe. 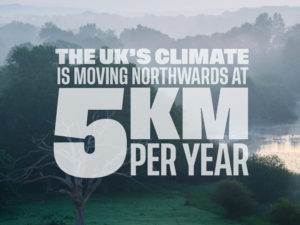 The report says that the shift – due to human-caused climate heating, and hundreds of times faster than the country’s natural climate warming at the end of the last ice age – is set to outpace many species’ ability to adapt and adjust their ranges. But Rewilding Britain’s research also shows that a massive increase in restoring and connecting species-rich habitats across at least 30% of Britain’s land and sea by 2030 could help save a fifth of species from climate-driven habitat loss, decline or extinction. The charity is calling for the creation of core rewilding areas across at least 5% of Britain, with a rich mosaic of nature-friendly land and marine uses across another 25% of the country.