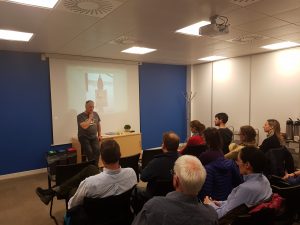 Other members of the Scottish Section Committee no doubt get bored of me droning on about the wintering population of taiga bean geese (Anser fabalis) I am privileged to work on, together with a small team of other keen individuals. This population involves just some 240 individuals which winter on the Slamannan Plateau in Central Scotland (nowadays the only such population wintering in the British Isles).

Nevertheless, my fellow committee members have occasionally suggested that I should organise an event to tell others about my involvement with these birds. So, having provided a talk snappily entitled ‘(Stalking) Scotland’s Bean Geese’ for the Isle of May Bird Observatory and Field Station Trust at the AGM of the trust in early 2017, and then having given the same talk for six different local branches of the Scottish Ornithologists’ Club in winters 2017/18 and 2018/19, it seemed rude not to do the same for the Scottish Section of CIEEM.

This I did on 19 February 2019, attended by some 16 or so members. Gratifyingly, they were already knowledgeable about the taiga bean geese, with a good proportion of the attendees putting their hands up when I asked whether they had seen them.

After providing some background information about the geese and the monitoring work that has been conducted on them since the 1980s on a ‘citizen science’ basis, I was able to describe how this work has been complemented in recent years by the successful use of catching and marking studies, including the deployment of modern tracking devices.

Fantastically, the tracking data generated by tagging some of the birds has been entirely confirmatory of all the good information generated over the years by traditional monitoring when the birds are on the plateau. It has also proved to be very useful when assessing the implications of development proposals.

Conversely, it has been entirely revelatory when the birds aren’t on the wintering grounds, as we previously didn’t know just where the birds went to when they were elsewhere. As I was able to demonstrate, we now know they use staging areas in Northern Denmark and in Southern Norway and Sweden en route between the Slamannan Plateau and the breeding grounds in south-central Sweden, near the Norwegian border.

As a result, our network of interested individuals monitoring the geese now very much has an international aspect. Long may this continue; this sort of coordination is obviously essential for the conservation of migratory species!

In addition, the tracking data has vividly demonstrated what a challenging process both the spring and autumn migrations of ‘our geese’ can be.

Most of all though, despite all the new information this work has provided, it has, as I am wont to say, merely proved that ‘the more we know, the less we know’.

Thanks to Tony Marshall of AECOM who hosted the talk at the AECOM offices in Edinburgh and provided the photograph.