The early stages of lockdown will have been a very difficult time for many, especially as outdoor contact was limited to one period of exercise per day for most. Wherever your specific interest in wildlife may lie, having access to cars and public transport will have undoubtedly led you at some point to expanding your quest to see rare and exciting wildlife to further afield than your home. However, these strange times have forced us to connect with nature on our doorstep in a way that many of us had forgotten how to do. Local wildlife has gifted many people a brief respite from the pandemic, and even created (and continues to create) some unexpected surprises, especially in the birdwatching community. 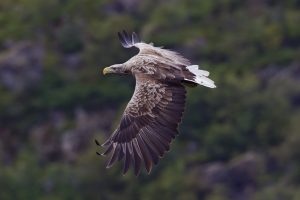 Linked by social media, it was evidently clear that birders (ever the competitive types) begun a new trend… lockdown listing! This was an attempt to record as many bird species from their gardens and local exercise walk routes as possible. Not only did this prove extremely fruitful for many who were trying to increase their garden lists, but also created some fascinating scientific data.

As March progressed into April, the keen-eyed sky-watchers locked onto migrating raptors passing though the country. This included a flurry of Osprey (Pandion haliaetus) and White-tailed Eagle (Haliaeetus albicilla) sightings, as these magnificent birds progressed north through the country to reach their breeding grounds. While several records of White-tailed Eagles related to wild birds passing though from the continent, some sightings were of released individuals which formed parted of a re-introduction project on the Isle of Wight. One of these immature birds was tracked over London, through East Anglia and up into North Yorkshire, before eventually dropping back through the midlands. British rarities such as Black Kite (Milvus migrans) were also found widely across the UK, as clear skies and southerly winds meant many overshot their breeding grounds in southern Europe and successfully crossed the English Channel.

In mid-April, and even more remarkable event occurred across the UK. Birdwatchers took to setting up deck chairs in their gardens, sitting and listening to birds calling in the depths of night. A breath-taking nocturnal migration event erupted, as the night sky across all corners of the country were filled with the soundtrack of northward-bound wildfowl. Eurasian Teal (Anas crecca) and Eurasian Wigeon (Mareca Penelope) were particularly abundant, providing a spectacular nocturnal soundtrack. 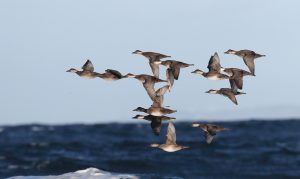 Common Scoter (Melanitta nigra) were also heard calling over gardens during the night. This may seem surprising as scoter are a sea duck, with inland records being typically scarce. However, citizen science is revealing that most of the western Britain wintering population of scoter make an overland crossing into the North Sea during the nights of early April! With birdwatchers widely reporting hearing the sounds of scoter from their gardens, with exact locations and times, this migration movement was mapped revealing important ‘west to east’ migration corridors including ‘Liverpool Bay to the Humber Estuary’ and ‘River Severn to the River Thames / Lincolnshire Washes’.

Back in the daylight, it is (at the time of writing) that time of year when urban gardens are filled with the excitable trilling calls of European Starling (Sturnus vulgaris) families, as they descend on lawns, suet feeders and fruiting trees across Britain. However, during May and June this year, many lucky garden-watchers were treated to something very special during lockdown, as their local starling flocks were joined by scarce visitors from much further afield! 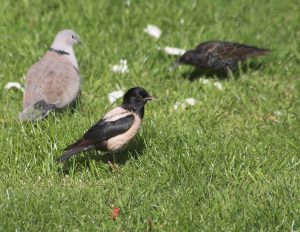 Rose-coloured Starling (Pastor roseus), also known as Rosy Pastor, are annual vagrants to our shores. They are typically are found in South-eastern Europe and the Middle East and spend the winter mainly in India and Sri Lanka. Every autumn, a couple-dozen juvenile and first-year birds are found mixed in with the starling flocks, with the east coast (as well as Cornwall) being the hotspots. While not the most inspiring to look at, a young Rosy Pastor is a worthwhile find for dedicated birdwatchers.

However, it is the breeding-plumaged adult birds that are the real stunners! The same size as the more familiar common starling, but with a bright pink chest and back, pink-tipped bill and a glossy black crest swept backwards. Like the younger birds, they often associate with Common Starling flocks. Although their occurrence is much less frequent, in some springs they erupt across western Europe and these large invasions inevitably reach Britain. So far, 2020 is shaping up to be one of those years. In fact, this year’s invasion has spread so far west, even the Azores claimed their first ever record of the species for the islands!

There have been well over 200 individuals recorded in the UK since the beginning of May, with sightings coming in from across the country (from Scillies to Shetland). Coastal towns have received most of the records, but some have been found in inland gardens too (especially in Northern England). Past influxes like are thought to occur during spring when birds overshoot their breeding grounds.  Hot and settled weather conditions across central and eastern Europe allow migrating birds to spread westwards and invade call corners of western Europe, perhaps even following the mass movements of insect swarms.

There is a possibility that this phenomenon will become more frequent in the years to come. Climate change is creating warmer, drier springs across central Europe. Additionally, this species is spreading its breeding range westwards into Bulgaria and Romania. It is without doubt that there will be more records of Rosy Pastor in Britain as the summer progresses, so keep your feeders topped up and your eyes peeled. 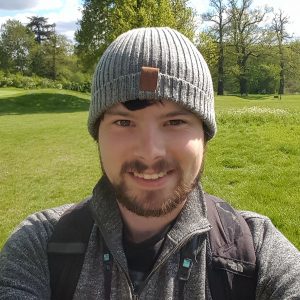 Drew Lyness, an Ecology BSc (hons) graduate from UEA, is an experienced, well-travelled, knowledgeable birder and naturalist. Formerly RSPB, he is CIEEM’s Volunteer Engagement Officer by profession, as well as a volunteer Council Member for the Oriental Bird Club in his spare time.