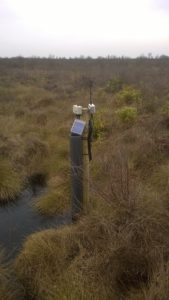 SAC, SPA and NNR. The site is home to a number of rare species, including the Pin-palp Beetle Bembidion humerale, and Mire Pill Beetle Curimopsis nigrita both of which are dependent on the peat that forms most of the site. Much of the site was worked for peat over generations but, during the post-war period, this became industrial in scale with extensive areas, especially in the northern part of the mire, becoming milled for peat and turned into an ecological desert. In the south of the site hand-cutting techniques were used, as peat was extracted for fuel, leaving a patchwork of baulks and cuttings, part of which (the Southern Canals) was designated in 1986 as a National Nature Reserve for its botanical interest, mainly Sphagnum mosses, bog vegetation and associated fauna.

The mire has been damaged by several hundred years of peat extraction and the aim of the WLMP was to identify measures to better manage water levels and bring the site back into favourable condition. This included ensuring that the correct depth of water required to permit the growth of Sphagnum mosses (especially S. cuspidatum) was maintained across the site, in spite of its varying topography.

Implementation involved the innovative use of technology in raised mire restoration through the use of telemetry to monitor and control water levels on the mire remotely. The mire was subdivided into a series of compartments, each of which was bunded with a fixed output weir controlling the water depth throughout the compartment. Groups of compartments were linked together in chains downstream with piezometers (trolls) measuring water levels at locations within the chain sending details via radio to a central system which is connected by a mobile phone signal to a central programmable database. This is also connected to a series of tilting weir structures that control the flow of water through the chains of compartments and, at the very bottom of the system, a pumping station. The structures also have water level monitoring installed and are pre-programmed to respond in certain ways when rainfall amounts are recorded or when water levels in compartments reach certain levels at certain times of the year.

All of the monitoring equipment on site, as well as the structures, are powered using photovoltaic cells linked to a battery (and solenoid in the case of structures) reducing the need for costly and potentially dangerous site-visits. The real-time data collected can be analysed and used to refine how the structures on site respond automatically to rainfall and water levels on site: this flexibility is essential as, over time as the mire becomes wetter and changes shape, flowpaths across and through the mire will change.

The gradual raising of water levels has accelerated the growth of the Sphagnum moss carpet and this is now beginning to colonise the baulk areas, with hummock forming species (S, papillosum, S. palustre) growing on the interface between the two, with the older stems senescing and (potentially) turning to peat: some of these hummocks are now growing healthily above the level of the water table, leading to paludification and, in time, the growth of a new bog surface.

The milling ‘flats’ have also been kept wetter during the summer months, when rainfall is low on the East side of the country, allowing Eriophorum angustifolium rhizomes to produce new plants which survive, binding the peat and preventing desiccation, exfoliation and subsequent wind erosion. These plants, and rows of Birch brash, are also now acting as foci for S. cuspidatum colonisation, keeping the surface wet, all of which is allowing the vegetated area to increase annually, closing the sward gaps and eventually forming an actively growing surface, i.e. a functional ecosystem. 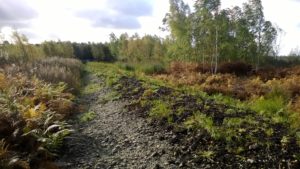 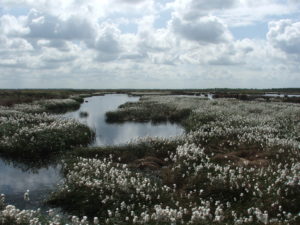