I have become increasingly amazed at the emergence of so much detail about other people’s lives, coming to light under the spending-more-time-close-to-people-you-wouldn’t-usually effect of this ‘new normal’.  Such a strange thing in these days of social distancing, but maybe I’m just noticing things more because life has slowed down, somewhat.

Take my neighbours for example.  Normally we merely pass the time of day, discuss the weather and vaguely moan about work/life balance when we meet on our street.  But the other week, my neighbour on one side furtively accosted me over the fence and – after a pre-amble that involved reference to her vegetarianism, crying when things died and preferring humane traps over the alternative – she admitted that she was just sounding me out about whether I’d be bothered if she shot The Rat Problem through her patio doors, with an air rifle.  Apparently, she was worried I might think she was ‘the mad woman from next door’.

On the other side, the husband has been continuing – most days, as far as I can tell – to ‘fix up the shed’, a lop-sided, crumbling wooden structure that is slowly dissolving into the soil, doesn’t have any glass in the windows and is a haven to robins as a result.  According to the wife, said hubby has been ‘fixing up the shed’ for the last fifteen years, and is almost finished.

And further down our garden, where our veg-growing patch is next to another, far shiner garden – previously kept utterly pristine by an indomitable 80+ year old lady, now taken over by a young couple with a hyperactive dog who barks his head off every time the back door opens and he is allowed to escape – overheard discussions include the one about the nice yellow flowers that are now taking over the lawn.  Bloke (cue monotone voice): ‘That’s a dandelion.  I know that is a dandelion.’ Chick (cue gentle, soft voice): ‘Maybe we should check it out in a plant book to make sure’.  Bloke (still in a monotone voice): ‘That’s a dandelion.  That’s definitely a dandelion’.  For absolutely ages.

So here we all are.  Stuck at home (mostly) and somehow more connected than usual with everyone else’s little quirks and quibbles, which, quite frankly, are minor compared to some of the other weirdness that is out there.  (No, injecting disinfectant into your bloodstream is NOT going to cure C-19).  In some strange way it put me in mind of how we ecologists end up sharing – and in some cases, over-sharing – our lives with each other, via long days in the field, long evenings standing/falling in ponds and even longer nights staring at buildings that you know probably won’t have any bats in, but you do it anyway.  Let’s face it, those three-hour car journeys to site were great for bonding with your work colleagues, even if you tumbled out at the other end knowing way too much detail about your colleague’s mum-in-law and the smelly-foot problem of their partner.  As a previous boss once said, ‘number one skill to check at interview: when you employ someone new, you want to make sure you can sit in a pub with them for an hour or two of an evening before you head out to do newt survey’.  Or words to that effect.  Perhaps then, we are all better prepared to cope with this living in closer proximity (but always 2m apart, obvs) than other slices of society.

For some, this has been a glorious time.  Not being able to work, but being paid anyway, to basically hang out at home, finish all those DIY projects that have been on the list since you moved in ten years ago, home-bake like mad (if you manage to find enough flour/eggs/yeast) and make your garden look more fabulous than it ever has done.  To top it off, the sun has shone for what now seems like forever, and the previous six months of endless rain surely happened last century, right?!!?!

For still others – and I think I’d fall mainly in this group – there is chaos.  Both parents working from home.  Kids also at home, full-time.  Kids Zoom-bombing every meeting, kids (well, my kid anyway) finally working out how to climb over the back of the sofa, open the drawer with the knives in, get the lid off the Sudocrem and smear it round the bathroom, eat handfuls of soil every time we venture into the garden, drop an un-opened can of beans on his foot, stick a finger/breadstick up his nose and post things into the sound-box of my guitar.  Usually soggy things with bits of fluff stuck to them.  And (my favourite) finding spikey bricks in my wellies when I’ve shoved my foot in really quickly, in a rush to get at least ten minutes of fresh air before darkness falls and I tumble exhausted into bed.  All at the same time as dealing with stressed clients on the phone, worried about the bats they are supposed to be re-housing after a demolition job, but who can’t complete their build-out and are freaking that they won’t meet the requirements of their mitigation licence.  And all the other usual challenges of working as an ecologist.

My partner and I were in the middle of decorating the office when this Thing happened.  We now have two ‘offices’ set up, having realised straight away that working in the same room as each other might not turn out so well…  There is furniture piled up in one room and barely any in the other.  Bits of various beds are everywhere, clothes are heaped up randomly, unfolded and un-sorted into clean/dirty/really filthy, wherever I look, and the kitchen floor has not been swept for… ssshhhh!  Semi de-constructed cot parts, piles of paperwork and screwdrivers all litter the floor, and the houseplants haven’t been watered for weeks.  Don’t talk to me about the tomatoes.  As I type, I can hear my little boy howling, and every time he gets shouty-er, my partner sings ‘Wind the Bobbin Up’ even louder.  I think he might be trying to get him to sleep (#notworking).

We are so lucky.  It could be so much worse.

Meanwhile, we are bombarded by pictures of people’s ‘perfect’ lockdown lives on social media, observe what might be perceived as some very selfish acts in supermarkets – but in fact might not be at all – and tell each other on Facebook who should, and who shouldn’t, be going to site.

But we can’t all be fearless and calm, all of the time, and not allow this scary time to sometimes eat away at us.  Even those beautiful Instagram feeds are more about individuals trying desperately to hang on to the positives in this current situation – and who can begrudge anyone that?  Perhaps we should start a new hashtag, #craptimeswithcovid or something similar, just to remind everyone that we all have our challenges as well as the good times.  Not to be negative, but to be realistic.

Because whatever you see of people’s mad, weird and – let’s face it, completely bonkers – lives at this time, even if it feels like more than normal, we know NOTHING.  Absolutely nothing.  We have no idea what is going on behind the scenes, what sort of hell folk are going through when the doors are closed and the curtains are drawn.  Money worries.  Domestic abuse.  Eating disorders.  Depression.  Elderly mum with Alzheimer’s in a care home.  Ramadan in lockdown.  Disabled child.  Shopping for yourself and three of your neighbours at the same time.  No garden.  (NO GARDEN.  Imagine).  Responsibility for feeding multi-generations all living in the same, cramped house.  Bereavement.  Sickness.  Alcoholism.  Four kids under the age of ten, all requiring home-schooling, whilst you work.  The list goes on.

Let’s not get angry at people’s choices, their odd coping mechanisms and their small celebrations of the positives.  Let’s be more tolerant.  Cut people some slack, don’t be too quick to judge and – above all – be kind to one another, in this strange, crazy time. 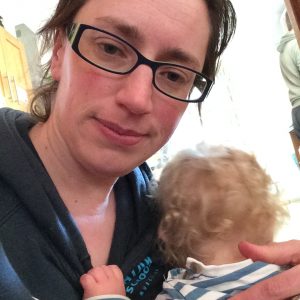 Di Clark has worked in ecological consultancy since 2003 and finally made the jump to starting her own freelance business in 2016. Di also works part-time as CIEEM’s Project Officer for Wales and sits on the Board of Directors for the West Wales Biodiversity Information Centre.