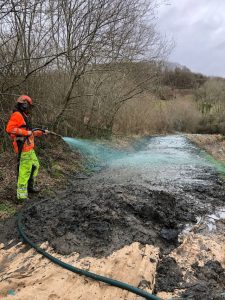 To help achieve its main goal, the CRISEP Project is investigating innovative treatment methodologies and research. In 2022, the Trust and STW are conducting the first trial of a new Himalayan Balsam treatment on the Penarth Feeder (Montgomery Canal SSSI/SAC and River Severn), using natural materials to suppress the growth of the plant and hydroseeding native grasses on top. The Project is also working in partnership with the Centre for Agriculture and Bioscience International on a new biocontrol for Floating Pennywort. A weevil, Listronotus elongatus, has been released in experimental field releases on two priority sites within the project area. This will include three rounds of monitoring throughout 2022, with overwinter assessments to assess its effectiveness.

The project has developed new approaches to data collection, including INNS treatment surveys on ArcGIS. This utilises a mobile app to record treatment data, site photographs, and location data which are then mapped online, allowing for temporal analysis of treatment effectiveness. The project also aims to install time-series photography and drone surveying to monitor biocontrol release sites. 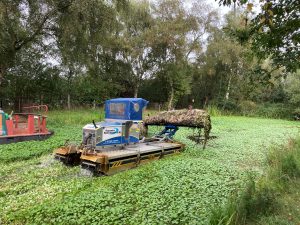 Another aim of the project is to understand the relationships between external and internal loading of nutrients on the growth of aquatic INNS, particularly the potential of phosphorus to be released from canal and lake sediments under varying environmental conditions. Results will be used to determine whether treatment products can be used to reduce nutrients and their influence on the growth of the INNS.

The project team has engaged a variety of internal and external stakeholders, including 100+ participants at the Trust’s West Midlands Regional User Forums, with representatives from Canal Societies to Local Authorities, local boaters and canal users, professionals and other Award sponsored by organisations working on invasive species and biosecurity to develop future partnerships, including Yorkshire Water, Wildlife Trusts, the Environment Agency, and the Angling Trust. The Trust is (at the time of nomination) designing a web page to showcase and engage the public and external organisations on the delivery of this project. This will include educational material as well as an interactive map to view site specific case studies.