This national project is reinforcing the small, fragmented population of the rare golden eagle in south Scotland. Beginning in 2018 with the translocation of three juvenile golden eagles, the project is now in year four of six, and has to date translocated 19 young golden eagles (secured from the Scottish Highlands and Islands) to establish a population higher than recorded at any time in the last three centuries. Project partners include NatureScot, Scottish Forestry, RSPB Scotland, Scottish Land and Estates, and Southern Uplands Partnership. 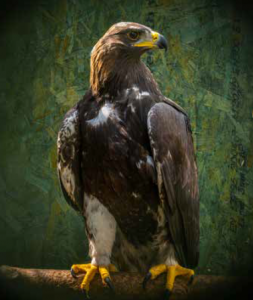 A contentious predator reinforcement project (potentially releasing a heavily persecuted bird of prey into a region where there was a history of illegal persecution of raptors), the project addressed the risks extremely carefully. There has been a focused approach to stakeholders and land managers, employing a full time member of staff to liaise with landowners and land managers and being open and informative regarding the movements of translocated eagles. Building trust in this way has allowed the project team to develop excellent relationships across south Scotland.

Public engagement has been critical to this success. The effectiveness and reputation of this project was cemented through a popular website and Europe’s first Golden Eagle Festival attracting an exceptional level of local community and visitor interest, and unprecedented local political and Government Ministerial support. There has been excellent coverage of the project by the media. All of this has bolstered the reputation of this community-founded species conservation recovery project. 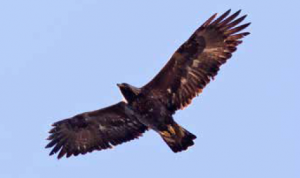 The involvement of local people in thesouth of Scotland has surpassed ambitions. Support has come from school children local estates and communities, and land managers supporting the donation of young golden eagles to south Scotland – in total, in excess of 14,000 people. Working with a local estate, an eagle information point ‘The Eyrie’, has been established as part of a popular visitor centre/café in Selkirk, attracting visitors from across southern Scotland and northern England.

The active support of schools, for example in naming released birds, has been exceptional. To date, more than 7,200 schoolchildren have been involved.

The key to success has been devising a partnership of land manager and nature conservation bodies who would provide robust and evidence-based support for the benefits of restoring the golden eagle population in south Scotland. This was developed in ways which would benefit the birds, and local community economic and cultural interests.

The Project has become a beacon for wider support for conservation management in rural communities. Working closely with land management groups such as the Scottish Gamekeepers’ Association (SGA), and the Southern Uplands Moorland Group (SUMG), shooting estates in South of Scotland have ‘adopted’ and named one of the 2021 released eagles ‘Heather’. The Community Outreach team works closely linking rural and urban schools to facilitate knowledge transfer between communities.