The Spains Hall Estate in Essex has been in the same family for 260 years and has been predominantly managed for arable production during that time. However, the Estate is now diversifying its land management, with the core drivers being biodiversity enhancement and increasing the level of ecosystem services. The changes include the implementation of a suite of nature-based solutions that are already having positive impacts both within the landholding and the wider landscape.

A series of land management changes have been applied on the Estate over the last few years, including implementation of Natural Flood Management (NFM) measures and release of a pair of Eurasian beavers within a strategically sited four hectare enclosure in 2019. These initial land use changes are part of the delivery of a NFM scheme that aims to reduce the risk of flooding to Finchingfield, a village located downstream of the Estate. Eight leaky dams have been installed upstream of the village on Finchingfield Brook and the beavers have been released under licence into an enclosure upstream of Finchingfield, after being absent from Essex for over 400 years. The leaky dams and beaver habitat modifications are slowing the flow and inundate fields on the Estate during periods of high flow, storing water on the land and reducing downstream flooding to homes and businesses.

Further interventions are now planned across the landholding for 2022, including additional NFM measures, the reversion of arable land and pasture to silvoarable agriculture and silvo-pasture, the creation of deciduous woodland to provide connectivity between existing stands of ancient woodland, and the release of a further two beaver pairs to create a 40-hectare beaver wetland. This diversification from crop production, which until recently has taken up approximately three quarters of the landholding, is predicted to increase the value of the land for biodiversity, the public and those who live and work on the Estate. 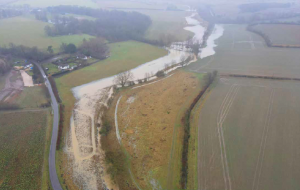 At the heart of the scheme is the collection of evidence and data to assess the effectiveness of interventions and build an evidence base to aid future works and assist other landowners and organisations. For example, for the implemented NFM measures this has included the installation of water quality sondes, collection of nutrient and pesticide samples, installation of loggers to monitor weather, water level and soil moisture, botanical monitoring grids and hydraulic flood modelling.

In addition to the ongoing monitoring, the increase in ecosystem service value has been quantitively demonstrated by a natural capital assessment undertaken by Atkins to explore the benefits that
the implemented and proposed land use changes could provide, thus enabling the Estate to shape future plans, provide better visibility of the potential for environmental markets, and build a business case for sustainable land management. The natural capital assessment has predicted significant increases in the following cultural, regulating, and support ecosystem services, many of which are already being seen:

Numerous partners have collaborated with Spains Hall Estate on this work, including Atkins, the Environment Agency, Essex and Suffolk Rivers Trust, Essex Wildlife Trust, and other organisations. The total capital cost for the scheme to date is approximately £45,000.