Determining whether bats use potential roost features (PRFs) can be extremely challenging. Aerial inspections have demonstrable advantages over emergence/ re-entry surveys conducted from the ground, but also significant limitations owing to irregular use of tree roosts by bats, and the rapidity with which evidence of use disappears. Current evidence-based guidance on tree survey for bats (Andrews, 2018; Diez & Pir, 2011) highlights regular roost-switching behaviour, and Andrews recommends up to 14 consecutive inspections for evidence of use by bats (depending on likely species and time of year) to enable a ‘more likely than not’ conclusion to be drawn. 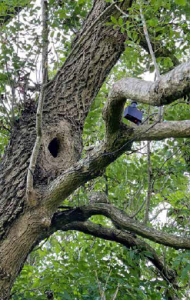 Andrews (2018) recognised the potential of trail cameras in recording bat emergence/re-entry but noted a lack of consistent reliability in detecting emergence of groups or individuals, principally because of the delay between detection and activation. If a bat is captured by a camera in mid-flight (after being triggered by motion), it is speculative to conclude that it emerged from the target PRF.

The BatCam addresses this shortcoming. It provides detection trigger from a narrow beam, high-sensitivity passive infrared sensor and saves discrete video clips from 5 seconds prior to, to 5 seconds following the trigger event to ensure that emergence is captured in full. This innovation is achieved through continuous loop recording onto internal RAM memory and extraction of the recording to a time-stamped video file in response to a trigger event. Replacement of batteries, remote activation and upload of videos are performed from ground level to avoid more than two climbs to the PRF. Tree climbing is a physically demanding, time-consuming and higher safety risk survey method. The BatCam allows consecutive night data collection with decreased risk to the welfare of ecologists through reduced tree-climbing effort. 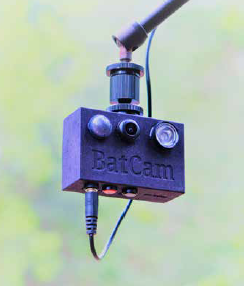 Development commenced in December 2018, with a working prototype completed in February 2019. The camera has been deployed at various locations during 2019, 2020 and 2021 both on known roosts to trial the function of the camera, and at PRFs with unknown use to supplement standard survey methods. Depending on the battery used, the BatCam can record for more than 14 consecutive nights on a single charge.

Trials of the camera’s performance against commercial survey work based on current guidelines (Collins, 2016) has been undertaken. The camera has repeatedly identified occupied roosts where internal inspection alone has not. Comparative trials against off-the-shelf cameras demonstrate consistently clearer evidence of the use of the target PRF. The project provides a significant advancement in applied technology, and has the potential for reduced survey cost, improved surveyor welfare and greatly increased quality of data.

It is widely recognised that assessments based on existing survey methods significantly undervalue the importance of PRFs in trees. The BatCam provides greater certainty over whether PRFs in trees (or other structures) are used by bats than is possible through standard snapshot survey methods. It enables robust data collection alongside significantly reduced survey time and costs.

If widely adopted, the BatCam has the potential to address current dilemmas of survey proportionality and inform evolving best practice survey guidance.