In her efforts to inspire action on the climate emergency and biodiversity crisis, Sarah has set up and led two groups. Wild about Rogerstone, launched in 2019, is a local community group promoting wildlife friendly, peat-free and organic gardening, as well as engaging people to appreciate the wildlife in their area. The second, launched in 2020, is an environment group for One of Many, which is a women’s leadership organisation, aiming to connect women who share a vision of a sustainable and just world for all, support women working in the environment sector to foster their strength and resilience using the One of Many leadership tools, and cultivate awareness of environmental issues and opportunities within the wider community. 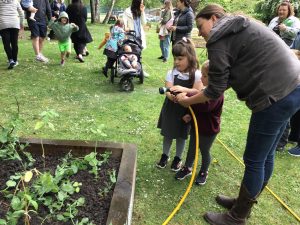 Sarah’s achievements in leading these groups are numerous. For example, since launching Wild about Rogerstone, Sarah has raised £29,220 for biodiversity initiatives in her local area, established a 3000 sq. m open-access community garden, sown a 1,000 sq. m community meadow area and secured five years of management. She has also extended the reach of the project through local biodiversity events, school trips, working with the local biodiversity officer at Newport City Council to establish No Mow May areas across Rogerstone and attracted 675 members to her local wildlife Facebook group.

Since establishing the One of Many Environment Group, Sarah has broughttogether 310 women who either work or volunteer in the environmental sector or wish to do more with their own environmental footprint into the dedicated Facebook group. She has also run eight online events on a variety of environmental topics with invited speakers, attended by 129 women, in addition to chairing weekly committee meetings to plan initiatives. 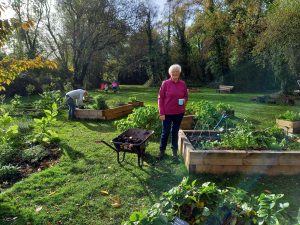 The success of these groups has inspired others to take action. For example, inspiring colleagues at both Arcadis and Amey to set up their own initiatives or join in action in their local network, and Sarah is regularly contacted by people who have seen her talk, or read an article or post, that has helped their own journey of taking local environmental action. The biodiversity initiatives have been covered by local press and Sarah has contributed articles to the blogs and regular newspaper columns of two Newport City Councillors. Sarah was also invited to show Councillors and Jane Bryant MS around the community garden she established.

WSP UK has been an active and committed force in leading action to address the climate emergency and biodiversity crisis. WSP co-founded ‘Pledge to Net Zero’ in 2019, committing environmental services firms to sciencebased carbon targets and public reporting, and have themselves set an ambitious goal of being a carbon-neutral business by 2025 and halving the carbon emissions of their project designs and advice by 2030. WSP’s global business signed up to the Business for Nature Call to Action, calling on governments to adopt policies to reverse nature loss in this decade.

In 2020-21, WSP UK led a Biodiversity & Natural Capital Campaign through which the specialist Biodiversity & Natural Capital team worked with think-tank Bright Blue to gather public perceptions of biodiversity. The research gathered data on public attitudes towards the value of the UK’s natural environment, how we access and engage with it, and the responsibility of stakeholders for protection and enhancement. WSP then created materials for engineers and client managers, such as “Client Conversation Starters”, “Biodiversity in a Nutshell” and “Biodiversity and Natural Capital 101” global webinars, to better equip them to talk about these issues and the relevance to their projects.

The team’s activities also include influencing wider policy change. Tom Butterworth, Director of Ecology, is a founding member of the UK Business & Biodiversity Forum (UKBBF). The UKBBF is actively lobbying government ahead of the Convention on Biological Diversity COP15, where new global targets will be set for nature recovery, including a specific target for businesses to progressively reduce their negative impacts and report on their biodiversity impacts and dependencies. At the 2021 Conservative Party conference, WSP held discussions with Environment Minister George Eustice about the role of business in the UK’s transition to a nature positive economy. Director of Sustainability, David Symons, also sits on the Aldersgate Group where he champions business leadership towards a low carbon economy and sustainable development.