Long-service lollipops? Sweet-based salaries? Don’t worry, we may be living in crazy times, but I’ve not lost the plot.

LinkedIn reminded me that I’m still here and that’s partly to do with lollipops. After two decades, I remain in the environmental management game with the same company. The work anniversary notification got me thinking. Why am I still here? Shouldn’t I be hopping between companies every five years?

My conclusion? Whenever I’ve needed understanding and flexibility, I’ve had it.

I shared these thoughts on social media (here). I’m not sure I went viral (let’s avoid that topic!), but I was bowled over by the response: hundreds of likes and dozens of positive comments. This prompted me to think more deeply about the type of support that makes a great workplace. There are lots of answers, the most important of which, in my view, is to create lollipop moments. I’ll come back to those later.

Many of the responses to that post praised my openness and courage in talking about personal bumps on the road, including having severe postnatal depression. All these lovely comments made me feel a bit uncomfortable, as I didn’t feel particularly candid or brave. I found it easy to share my experiences, which I think reflects a change in society and many (I hope) work cultures. Today, mental health issues are not hidden away. We are constantly encouraged to talk openly about our mental well-being in the same way we do about our physical health. We have mental health first-aiders in our businesses, Time-to-Talk initiatives and everyone from burly drillers to our board of directors being honest about how mental health issues affect them.

I concluded my LinkedIn post with my answer to the question I’d asked myself – why have I stayed? The answer? Support. Whenever I’ve needed understanding and flexibility, I’ve had it. I feel very lucky to be able to support others on a daily basis, but we all have such opportunities, which brings me to the point about lollipops.

Lollipops are the little things you do that make a difference; things you may not remember you’ve done. Drew Dudley coined the term in his TED Talk (Leadership in Lollipop Moments). He describes distributing lollipops to a queue of people enrolling at university. His kindly clowning broke the ice and introduced two freshers, one of whom had just decided to flee in terror at the prospect of entering higher education. Drew has no memory of embarrassing a young man by making him give a lollipop to the terrified young woman standing next to him. Four years later, the woman approached Drew to say that the lollipop moment had made her stay. What’s more, the young couple later married!

It’s a lovely story, but Drew’s point is that leadership isn’t about a few people changing the world. It’s about all of us making sure we give and say thanks for those lollipop moments.

For me, these moments are giving people credit for work well done, phoning for no reason other than to check they are OK or giving someone a hug (in an appropriate manner and before COVID-19 social distancing; other HR and health and safety standards may apply!). But also finding, and actively looking for, the opportunities to tell people about the moments when they’ve made the difference to you. Sometimes it can feel a bit cheesy, but when I get the feedback the other way and feel that ‘Ready Brek glow’ (warm feeling inside for those who may have missed out on the 70s and 80s), I know it’s well worth it.

I remember a team member sheepishly announcing that she was pregnant. My instant reaction was to hug and congratulate her. She burst into a flood of tears and, when we chatted later, she said thank you for being pleased and told me of her former employer’s cold response and that the company had made her life very difficult for being pregnant.

But it’s not just about the big stuff; it’s about little things. Saying thank you for the small actions that you appreciate; calling a person who is off sick, not to hound them but to ask how they are. These are small actions that count. In the current crisis, making time to call colleagues who are isolating or working from home is more important than ever. Just calling to share a few minutes of trivia can make such a difference. It is also when we realise just how important our work family is. In my case – they keep me sane!

Treat people well and they will reward you for many years! 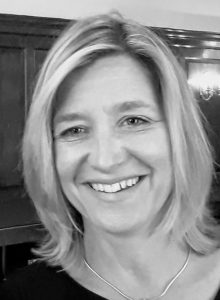 Sarah Mogford has worked as an environmental consultant for over 20 years; primarily in the fields of auditing and due diligence throughout Europe, Asia and the former Soviet Union.  The auditing aspect of her technical skills leans on her naturally nosey nature and the due diligence aspect on her ability to deliver under pressure.  She has recently been appointed to the main board of RSK Group and has led the Environment and Planning Division of the UK business for the last 4 years.