Kimberley is a Qualifying member of CIEEM and Ornithologist at Mott MacDonald. Due to her detailed knowledge and skills, she achieves quality work beyond her grade and is now the lead ornithologist in the northwest of England. Kim has produced and undertaken comprehensive bird monitoring and baseline surveying methodologies for large schemes, such as Crosby Flood and Coastal Erosion Risk Management Scheme and designed artificial winter shorebird roosts for the Humber estuary. 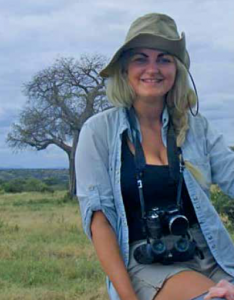 An example of a project led by Kim is the Tetney Lock Outfall in which she oversaw, assessed and mitigated all adverse ecological impacts at Tetney Lock, Grimsby. She also responded to emergency works and successfully translocated a wren’s nest as opposed to destruction, designed a nest box to replicate the mould of the original nest site, monitored the behaviour of the bird and moved the box over 20m away (across a number of days) to a safe area.

Kim has also been a volunteer surveyor for the British Trust for Ornithology for 5 years, undertaking ringing surveys on sea birds and passerines, contributing to the Nest Record Scheme, undertaking hen harrier surveys, other raptor and owl surveys and fostering. Kim put extensive time into the Isle of Man 2017-2018 seabird census, being one of two people spending 1000 hours at sea logging more than 10,000 sea birds. She also coauthored the resultant report which was important in highlighting declines of local seabird colonies and providing evidence for marine reserve requirements. 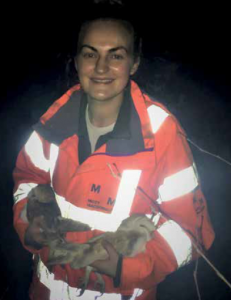 A strength of Kim’s is promoting understanding and awareness of ornithological and wider ecological issues. In her role as ornithologist and her various ECoW roles she has interacted with a wide range of specialists, including local government, engineering colleagues, construction workers and project managers. She regularly gives tool box talks to site teams and has trained new members of staff in best practice techniques.

Kim is often called on by clients when things ‘go wrong’ due to her quick thinking and ability to calmly identify solutions, and is known to find efficient methods of achieving goals. Kim is persuasive with site and project managers –always looking at ways to increase or balance the nesting opportunities available for birds, particularly where works might create a temporary and (or) permanent loss to a species.