Sudbrook Village is located on the banks of the Severn Estuary, Monmouthshire. It was built for railway workers in the 19th Century and supported a paper mill which closed in 2006. Arcadis have delivered ecological services in relation to this site since 2006 – first as Cresswell Associates and then Hyder Consulting before becoming part of Arcadis. In 2011, Harrow Estates took control of the 100-acre site, which included 34 acres of previously developed land, former plantation woodland, agricultural land and a Scheduled Ancient Monument. Only part of the area of previously developed land is allocated in the local plan with the rest to remain undeveloped. The development was for over 200 homes set within a sensitive landscape. 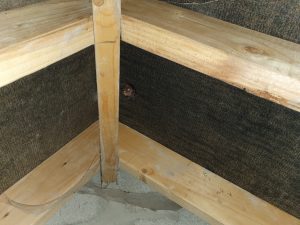 Ecological constraints included the Severn Estuary of international importance for wintering birds and salt marsh habitats, a county wildlife site, a lesser horseshoe bat roost, a residing population of slowworms and the presence of buildings with asbestos added to the challenges.

Obtaining planning permission for the site took more than a decade. During this time ground investigation works were required to identify contamination. Areas needed to be cleared of vegetation to facilitate these works and the demolition. It was not cost effective to install a reptile-proof barrier around the site due to the dominance of hardstanding. A strategic approach to reptile mitigation was adopted with reptile-proof fence installed only next to the disused railway line. Elsewhere, strips of unsuitable reptile habitat were created to discourage ingress. Rubble piles were surrounded by open concrete/tarmac to reduce the likelihood of colonisation. Artificial refuges were installed, and reptiles moved in advance of phased habitat manipulation. Once clear of reptiles the site ecologists undertook destructive searches and the ground was made unsuitable for reptiles. Linking the receptor to the hedgerow network and other suitable reptile habitat enabled the translocated population to mix with extant populations. Material generated by site clearance was used for reptile hibernacula in the receptor site. By creating the reptile habitat next to mature hedgerow there were ready made safe places of shelter and hibernation features available as soon as the area was fenced. 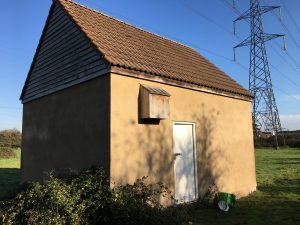 The papermill buildings supported brown long-eared bat night roosts and a day roost with small numbers of nonbreeding pipistrelle, brown long-eared and lesser horseshoe bats. In 2014 a purpose-built bat house was designed by Arcadis and constructed (a separate planning permission was obtained). In 2016 the building with the bat roost was demolished under licence for reasons of health and safety (asbestos and deterioration of the fabric of the building). Arcadis has been undertaking ecological monitoring since 2016 as a condition of the planning permission and has monitored the bat house over the years with the final (5th) year of monitoring scheduled for 2021.

All features of the bat house that are accessible for inspection have been used by small numbers of roosting bats including horseshoe bats as a day and night roost in summer and winter as soon as the house was constructed. In summer 2020 a maternity roost comprising 15 adult lesser horseshoe bats, three with pups, was confirmed and it is hoped that they will continue to use the house in future years providing a real boost to the local population.