New technology provides the opportunity for innovative fieldwork and assessment methods, enabling potential benefits to the 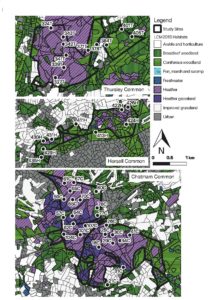 monitoring of notable species and management of important sites. Bioacoustic monitoring has transformed the understanding of bat and cetacean ecology in recent years, but so far, has been little used for other taxa – despite a rapidly increasing scientific evidence-base.

In 2018 in the first project of its type in Europe, and one of only a handful of similar studies undertaken globally, Baker Consultants recorded bird song at 44 sites within the Thames Basin Heaths and Wealden Heaths SPAs using automated recording units. These sites are internationally designated for their breeding populations of European nightjar, woodlark and Dartford warbler. The data gathered from bioacoustic monitoring, indicating the presence/absence of species detected during the survey, was assessed within an ‘occupancy modelling’ framework. This is a relatively new statistical analysis method that allows population density (‘occupancy’) to be calculated, whilst also taking into account the accuracy of the survey method (‘detectability’). The study is also the first in the UK to undertake a largescale survey for multiple bird species using automated recorders. It therefore expands the geographic scope of case studies for these methods, and applies them in a new habitat, beyond the American forested ecosystems in which most previous studies have been located.

The joint project with Natural England allowed for this audio data to be used to determine the population sizes of the three target bird species, demonstrating that the method could be used effectively to monitor the conservation status of the birds on the site. The final reports and method statement presented to the Joint Strategic Planning Board in June 2019 and the project has since been used to demonstrate the suitability of this approach for site assessment to stakeholders and a wide range of other audiences.

One of the benefits of the approach taken in this study is its ease of replication. The automated recorders used were off-the shelf commercial units, the software for call analysis (Kaleidoscope Pro) is also widely available and currently used by a number of organisations. Statistical analysis was conducted in open-source R and the code scripts have been made publicly available in a permanent data repository (Zenodo). As such, the project could be repeated by others on different sites, and with different species, as appropriate to their own project needs.

In addition, the project has also prompted the development of a draft protocol for bird bioacoustics, published in CIEEM’s In Practice, has been included as a case study in a CIEEM webinar and training workshop on bioacoustics, and delivered at talks for the BES and UK Acoustics Network. 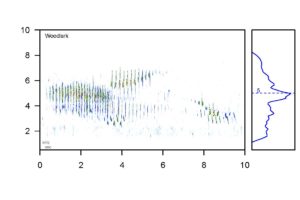 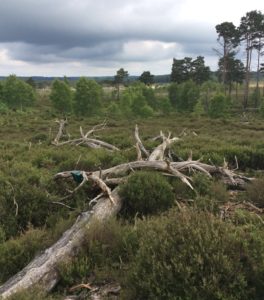