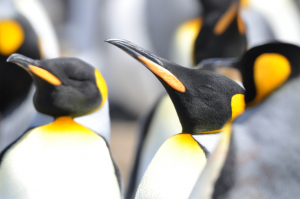 This blog post was timetabled to happen just after I got back from fieldwork in the Antarctic peninsula, a gratuitous excuse to show-off my penguin photos, whilst also discussing some of the different ways that a career as an ecologist can take you.  You’ll likely be unsurprised to hear that I am not, in fact, fresh back from Antarctica as I write this. Like my summer fieldwork (set to be the first year missing from a 25-year photo ID dataset), and I imagine much of your scheduled fieldwork, it was cancelled due to coronavirus and continuing uncertainty. Please don’t think I’m complaining; this was absolutely the right decision, and in the face of people losing loved ones and livelihoods, and the sacrifices made by many of our key-workers, it would be churlish in the extreme to lament missing a field season.

But what is a marine biologist to do when asked to work from home?

I tend to jokingly describe myself as a “dolphin counter” when people ask what I do. I work primarily on producing abundance estimates and distribution models for cetaceans. My current geographic focus is the north-east Atlantic, but not exclusively, and it would have been whale counting had we made it south to the Antarctic Peninsula this summer. There are lots of different methods for conducting these assessments; passive acoustics, photo-identification, distance sampling, genetics – British Antarctic Survey are even using satellites. The appropriate method will depend on many different factors, including the ecology of your target species, the study area of interest (both size of, and location of), timescales, budget, and so on. You may want a combination of these techniques. As with all good science, the best way to plan your study is to start with your question and then build a survey to work out how best to answer it. 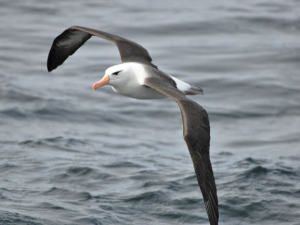 For many species, and in many of the locations I’ve worked, ship-based distance sampling remains the most appropriate technique. Some locations are just too remote to survey by any other means (at least until resolution on the satellite footage gets better). Last year’s Antarctic field season (which did take place) was one such example. I was part of a team surveying for whales in the waters around the South Sandwich Islands and South Georgia.  This was the first time for 10 years that the South Sandwich Islands had been surveyed for whales. These islands are tiny specks in the South Atlantic. They are incredibly inhospitable – so much so that even the hardy whalers and sealers of the late 19th and early 20thC left them largely alone. There’s no airstrip, and nowhere onshore to land a boat. The weather is lousy, the volcanos are still active. The only way to work here is to go in a ship, with everything you need on board with you – and hope the fog clears long enough for you to see something when you get there.

Samuel Johnson once said that “being in a ship is like being in jail, with the chance of being drowned.”  I know a lot of people who would agree with him. It is not a lifestyle for everyone – my poor mum gets seasick standing on a floating pontoon.  As well as the obvious risk of seasickness, your freedom is curtailed in many other ways as well: you have limited space, limited capacity for exercise, you have to eat the food that’s onboard, you only have the people onboard with you for company and you miss family and friends, as well as important social occasions.  Large research ships have wholesale shopping privileges, but when I worked on a much smaller research yacht, we were even known to clear supermarkets out of pasta and toilet rolls – I’m guessing you can all see the parallels…

I subscribe more to the “Jack Sparrow” school of ocean philosophy than the Samuel Johnson one. I’ve been to sea every year since I graduated my BSc, which is longer ago than I’d like to admit. Sometimes just for short trips, 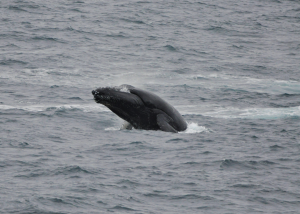 sometimes for months at a time.  I love the big skies and wide, empty horizons. I love the way you can see stars at night offshore so much more clearly than you ever will on land. Fulmars keeping pace with you, flying along at eye-height. Beautiful green trails of phosphorescence in the water on a dark night; northern lights. Above all, that feeling that today might be the day you see something amazing. For me, the prospect of a year without fieldwork is one I’m finding harder to come to terms with than being required to remain in my house.

Back to the question above; what is a marine biologist to do when asked to work from home? When you have the isolation of being at sea, but with no possibility of any good sightings? Time for some positive thinking – there’s some good points here too. Minimal risk of drowning for one, as well as zero possibility of seasickness, much better internet, and also pets. It’s not all bad. For me, it’s time to crack on with the number crunching and report writing. Time to look forward to planning for future seasons. Who knows, maybe I’ll even get that photo archive sorted out, which has been on my list for years. Time to rephrase the narrative from “stuck at home” to “safe at home”. For now, I’m off to make a cuppa and enjoy the company of Sir David for a Blue Planet II rewatch.  Now… bring me that horizon… 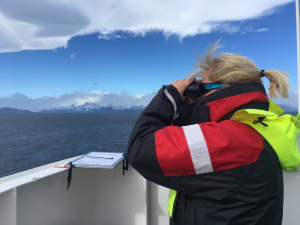 Claire is a marine mammal biologist at the Sea Mammal Research Unit, in St Andrews. She has been working on marine mammals for almost 20 years, and will soon be starting a new project in Oahu, Hawaii (travel restrictions permitting). Claire is Vice Convenor of the Marine and Coastal Special Interest Group.