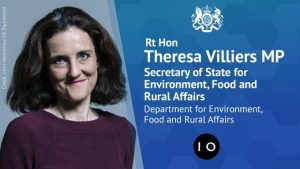 Yesterday, new Prime Minister Boris Johnson announced Theresa Villiers as the new Environment Secretary. She takes over from Michael Gove who has been promoted to Chancellor of the Duchy of Lancaster.

So what do we know about Theresa Villiers?

She has previous ministerial experience as Northern Ireland secretary between 2012 and 2016, and was a transport minister between 2010 and 2012. She has also previously been a MEP for London.

On the environment, Theresa Villiers has voted both for and against environmental policies. She has voted against lowering greenhouse gas emissions targets and for the climate change levy to be applied to renewable energy generation. She also appears to be in favour of fracking. On the positive side, she has opposed the Heathrow expansion on the grounds of air quality and also opposed live transport of animals for slaughter. And she has supported lifestyle changes to mitigate climate change.

Theresa Villiers is a Brexiteer and has argued previously for a ‘no-deal’ exit from the EU.

Michael Gove set the bar high for environmental ambitions. In some regards, it is a pity that we will not get to see him follow through with the progressive policy direction that he was taking Defra in.

We look forward to a constructive working relationship with Ms Villiers.