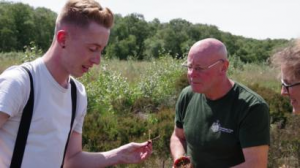 Plants are the fundamental basis of most life on Earth. Aside from their undeniable ecological importance, they themselves are fascinating organisms, which are more than worthy of preservation. They can be devious, like the Broomrapes in the genus Orobanche, stealing nutriment from host plants, predatory, like our wonderful, insectivorous Great Sundew (Drosera anglica), and they can cooperate with other organisms, like Common Cow-wheat (Melampyrum pratense), in its production of sugary elaiosomes, attracting wood ants (Formica spp.)  to disperse its fruits. Plants are extraordinarily exciting creatures that are just as alive and vivacious as any vertebrate!

My journey towards consultancy and conservation began at the age of six, when I began to grow sunflowers, fruit, and veg in my sheltered garden in Cheshire. I fondly remember Monty Don on an episode of Gardeners’ World promoting the use of wildflower seeds to encourage pollinators into gardens. Following his advice, I decided to spend my £3 per week allowance on a pack of Suttons wildflower seeds, dedicating a small square metre of the garden to these; months later, these fabulous plants began to flower. Plants like Corn Chamomile (Anthemis arvensis), Cornflower (Centaurea cyanus) and Garlic Mustard (Alliaria petiolata) began to grow and were absolutely swarming with life. I remember sitting for hours just watching this patch, with a little Reader’s Digest wildlife book entrusted to me by my gran. One year on, I decided to get rid of my fruit and veg, and devote the entire garden to wild plants, and from there, my interest in wildlife developed. It wasn’t long after this initial interest before I was out almost every day after school during summer, bird watching, looking for reptiles and, of course, admiring some of the marvellous plants near my home, trying to identify them using my trusty photographic Collins Guide.

After countless hours of gardening, recording, and volunteering during my teens, in 2014, I started my undergraduate degree in Ecology at Edge Hill University; my time at university was utterly divine! The tutors were so helpful and many were also excellent botanists – like Paul Ashton and Mary Dean, who got me involved in field work as much as was possible. I took up the offer of a research position which was particularly good, enabling me to participate in botanical surveys across the New Forest and parts of Scotland to assist a PhD project. This was all whilst balancing a part-time catering job, part-time ecology field assistant position and volunteering commitments.

In my third year of uni, I decided to finally update my LinkedIn, adding a number of people one night early in 2017, which happened to include my old boss. To my absolute shock, I woke up the next morning and had been invited to a prospective job interview, which I graciously accepted. The interview went really well, and I was subsequently offered the position of ‘Junior Ecologist’, which I took, beginning my journey into consultancy.

Upon graduation from Edge Hill University, I was lucky enough to be awarded some scholarship money to the sum of £2000. Having been a student for the majority of my life, I may as well have won the lottery, and I pondered for a good few days on how to spend this generous sum.  After a great deal of consideration and liaison with my local BSBI Vice County recorder, local botanists, Natural England and others, I decided to use this money in initiating a botanical conservation programme – the North-West Rare Plant Initiative (NWRPI), set up in 2017, targeting just under 50 of North-West England’s rarest and most threatened plant species with the one overarching aim of securing their prospects in the region, with the use of ex situ methods. Two months on, and the NWRPI caught the attention of Chester Zoo and Lancashire Wildlife Trust, who are the two primary funders of the project to date.

As well as being able to work on some amazing projects and schemes with my ecology consultancy, I am incredibly grateful to be funded for some of my conservation work. Since its conception in 2017, NWRPI has undertaken over 40 reintroduction projects in line with IUCN and JNCC guidelines, of which some have already shown signs of exceptional success…

Lesser Bladderwort (Utricularia minor) is one of those successes. One of only a few ‘carnivorous’ plants in Britain, Lesser Bladderwort is a spectacular little thing, adapted to nutrient-deficient habitats, namely peatlands. In 2018, this red-listed ‘Vulnerable’ plant was, with the exception of Cumbria, relegated to a single puddle in NW England on a Delamere peatland. After in-depth liaison and obtaining relevant permissions, I took a small number of plants from this puddle into cultivation. Again, with relevant permissions in place, I later reintroduced this extraordinary plant across seven sites. Monitoring during late 2019 revealed an exponential increase in the population across the Manchester Mosses Special Area of Conservation (SAC), from an initial c.60 plants to a population now exceeding 29,000.

My initial interest in plants over 15 years ago has led to this great outcome, and others, and I aim to continue the NWRPI work, as well as acting as ‘Ecologist and Botanical Specialist’ for my consultancy, pursuing other conservation interests, and studying for an MSc qualification with Manchester Metropolitan University.

Finally, I am extremely grateful for all the support I have received from individuals and other agencies. This year, NWRPI has also been lucky enough to be nominated for an Echo Environmental award and CIEEM awards  and is even going to be featured in Springwatch. Who would have imagined how far a £3 pack of wildflower seeds could lead… 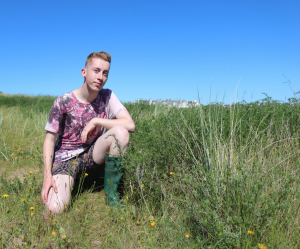 Currently operating as both Ecologist and Botanical Specialist for Tyrer Ecological Consultants Ltd and as Project Coordinator of the North-West Rare Plant Initiative (NWRPI), Josh Styles ACIEEM is an exuberant and enterprising individual with a background principally in botany and conservation. After securing several successive academic achievement awards during his stay at Edge Hill University, he is now balancing both his consultancy and conservation work with a part-time MSc in Biological Recording and Ecological Monitoring at Manchester Metropolitan University. Alongside his busy working life, Josh also regularly runs botanical training events and is employed by One Tribe TV for occasional television casting work.