The reopening of the Oxford to Cambridge rail route by the East West Rail (EWR) Company will link people with jobs, homes and economic hubs. Work started in 2015, with Phase 2 of the project (EWR2) being delivered by the EWR Alliance (EWRA) – a multi-disciplinary partnership of Network Rail, Atkins, Laing O’Rourke and VolkerRail – and incorporating the installation of 37km of new track connecting Bicester and Bletchley. Closed in the late 1960s, this section of railway had been left unmanaged, with nature reclaiming the area to create important local habitat.

The project required a Transport and Works Act Order (TWAO) process, which included Environmental Impact Assessment and a subsequent Public Inquiry. During the design phase the ‘mitigation hierarchy’ was applied, with workshops held to review every metre of the Project, with input from the design and construction teams (and the results of more than 12,000 ecological surveys). 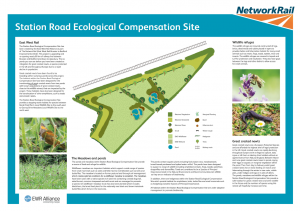 Where the project faced no choice but to lose vegetation, these losses were offset by the early introduction of Ecological Compensation Sites (ECS). A strategic move, these sites form part of the Alliance’s protected species mitigation. The locations – 20 along the line of route – were established, two years prior to the start of construction works, providing high quality habitat/receptor sites for a wide variety of fauna and flora and connected to both the railway and existing landscape features. The creation of these sites, which total over 100ha in size, (including 45 ponds, 12 artificial badger setts, a bat house, over 70 bat boxes and the planting of 150,000 plants and trees), particularly prior to the granting of the TWAO, represents a significant investment by the project and demonstrates strong environmental credentials from the outset. Of particular significance was the project’s commitment to leave a legacy of 10% biodiversity net gain (BNG), making EWR2 the first major rail infrastructure project to do so.

This approach to environmental mitigation helped facilitate the securing of protected species licences from Natural England (NE). Working alongside NE and affected landowner/stakeholders, EWRA ecologists developed a strategic approach to sitewide mitigation and licensing, leading to more sustainable ways of working, e.g. less use of single-use plastic fencing and streamlined translocation programmes. This in turn provided cost efficiencies and programme certainty, as well as demonstrating maintained favourable conservation status for those species affected. The impact of this approach is probably best represented by the status of the great crested newt metapopulations with, of the 10 monitored, six showing positive impact and four neutral – even during the height of construction works.

This project exemplified a number of positive outcomes. For example

This approach resulted in the creation of more, enhanced habitats, maintained favourable conservation status whilst maximising value for money for the UK taxpayer.