This award is sponsored by:

The Beautiful Burial Ground (BBG) project has been running since early 2018. It aims to put all burial grounds; churchyards, chapel yards and cemeteries, onto the map in terms of biological recording.

Burial grounds are disproportionately good for biodiversity. They contain our oldest trees, fabulous lichens, a wealth of fungi and many have species-rich grassland whether it is managed as a meadow or mown short. They are refuges for species currently under threat or in steep decline such as hedgehog, swift and slow worm. They are vital green spaces within all of our communities. 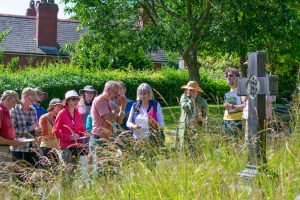 There are over 20,000 burial grounds across England and Wales, covering an area equivalent to the Exmoor National Park. Caring for God’s Acre aims to support the 150,000 or so volunteers who look after these special places. They became aware of the wealth of data on these biodiversity hotspots and that current recording systems do not provide data which is specific to burial grounds. They lack statutory designation for biodiversity and a consultation showed that whilst burial ground managers tend to welcome information and advice on biodiversity, biological recorders rarely go there. As a result, change can be planned with little or no reference to biodiversity.

The BBG project encourages recording in burial grounds and making those records accessible to both recorders and those managing these special places. Two main approaches have been used:

Firstly, by running over 100 training activities for almost 1650 volunteers CfGA has encouraged biological recorders to go and take a look. In addition, the CfGA team has encouraged volunteers to run their own recording activities and in 2021 they led a partnership which organised Churches Count on Nature (CCoN). Participating churches took part in Love Your Burial Ground Week, running a citizen science activity of their choice, with 540 churches taking part. The BBG project has directly resulted in over 27,500 new records. 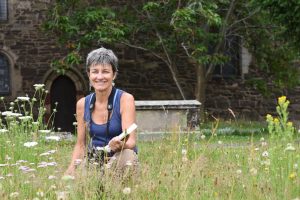 Secondly the project team has prioritised making this biological data, plus historic biological records, available to two main audiences; naturalists who have an interest in records and are familiar with systems such as iRecord and the NBN Atlas, and burial ground managers or those making planning decisions for whom biological records and the data systems are unfamiliar.

Working in partnership with NBN, the Church of England and the Church in Wales, most burial grounds across England and Wales have been mapped. NBN have created their first site-based portal on the NBN Atlas where data known to be from burial grounds can be displayed and accessed by everyone.

The next step of this project is to bring biological data into the church planning system via their built heritage database – The Church Heritage Records (CHRs) of England and Wales. There are two new data fields live on the CHRs: ‘Ancient & Veteran Trees’ which draws on the Ancient Tree Register via partnership with the Woodland Trust, and ‘Designations’ including Local Wildlife Site. Two more fields are currently being built. These are ‘Seek Advice’ Species, a list of protected species likely to be found in burial grounds plus some other species which, if present, need consideration when planning management or change, and ‘Summary of Ecological Importance’, giving site managers an idea of the biodiversity value of their churchyard or cemetery.